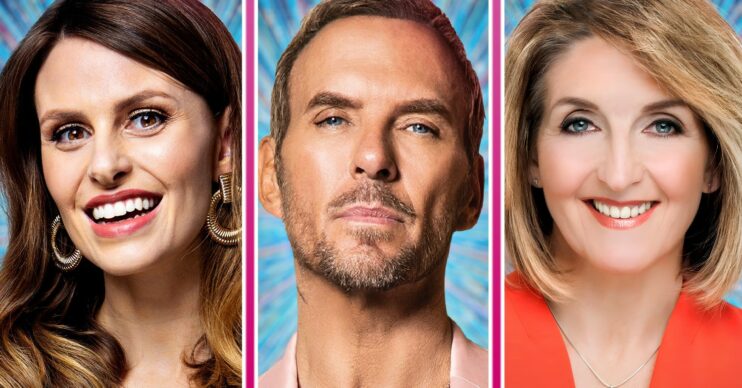 It all kicks off this September

The 15 contestants for Strictly Come Dancing 2022 have now been announced and the line-up is brilliant!

The show – rumoured to be starting on BBC One on September 10 – is back for its 20th series this autumn.

And with it comes a whole raft of fresh celebrity dancers – so who’s who?

There have been rumours circulating that presenter Helen would be doing this year’s show – and now it’s official.

Over-achieving mum-of-three Helen can’t wait to get started, saying: “I’m really excited to get stuck into a fun adventure. My family and friends have always loved the show and can’t wait for me to get started.”

Martin Fowler actor James Bye is swapping his market stall for the salsa!

His announcement was made on GMB on August 12.

James said: “I’m not known for my shimmy or my twinkle toes – in fact my kids regularly laugh at my dad dancing.

“But it’s an honour to be asked and I’m going to give it my best shot.”

So will he be able to match up to Rose Ayling-Ellis’ winning moves? Time will tell!

Countryfile star Hamza will be getting his dancing shoes ready to do Strictly.

In a statement, Hamza said: “I am absolutely over the moon to be joining Strictly 2022.

“Never in a million years did I think I’d be on such a cool show.”

He continued: “I’ve been watching it for years and I can’t believe I’ll actually be there dancing live in front of the British public.

“My dance skills are currently at the level of ‘1970’s disco vibe’ but I’m ready to work hard and will be shaking it every time I get the chance – shake it ‘til you make it!”

Gorgeous Fleur, who found fame on The X Factor, was announced bright and early on August 11.

And she said she’s “nervous” and “thrilled” to be taking part.

“It’s such an honour to be on the show after years of watching it with my father who loved it so much.

“Unfortunately my dad is no longer with us but I know he will be watching over the ballroom in spirit,” she said of dad Malcolm who died in 2020.

“I’m doing this to make him and my family proud and can’t wait to get my dancing shoes on!” she added.

August 10 saw footballer Tony Adams sign up to the show.

He became the 11th star to join the list of 2022 Strictly contestants.

Tony said: “To say I’m excited is an understatement.

“The lure of the sequins and the call of the salsa has me swapping my battered old football boots for a set of Strictly soft shoes.

“I am absolutely thrilled to be giving it my all on this year’s 20th anniversary of Strictly Come Dancing.

“I can’t wait to meet my partner – god help her – and start the dancing,” he then added.

‘Intergalactic pop superstar’ singer and actress Molly Rainford will be taking to the dance floor this autumn.

In a statement, she said: “I’m so excited to be part of Strictly Come Dancing, I’ve watched it for years and can’t wait to meet the pros and the others taking part!

“I can’t wait to learn the moves and get dancing.”

On August 9, Ellie Taylor announced she would be taking to the Strictly dance floor this year.

The news was revealed on ITV’s Lorraine.

In a statement, she said: “Well, cover me in fake tan and roll me in sequins! I’m absolutely over the moon to be a part of Strictly 2022!

“I’ve watched the show for years so to be able to take to the dance floor is a dream come true, for both me and mum who is a Strictly super fan!”

Matt, of course, is best known for being a member of 80s pop band, Bros, along with his brother, Luke.

“I’m extremely nervous and excited, but I’m optimistic because I’m very supple from the knees down,” Matt said upon being announced.

The 53-year-old has previous Strictly experience.

He took part in the Christmas Special back in 2013. He performed an American Smooth to Winter Wonderland, picking up 35 points.

Tyler West is another star to sign up for this year’s season of Strictly Come Dancing.

Tyler, 26, is a radio DJ and presenter. He is best known for hosting weekday afternoons on Kiss FM.

“‘I am SO gassed to be joining the Strictly family! As I started writing this I already got cramp,” he said.

“It’s going to be one crazy incredible journey which will no doubt be SO far outside my comfort zone,” he continued.

“‘It’s a show that means so much to me and my family and I can’t wait to seriously shake a leg on that shiny dance floor… with a side of sequins.”

Ellie said that she is “literally bursting with excitement” at the prospect of dancing in the new series.

The BBC once again makes history with the announcement that Ellie is taking part in the show, as she will become the first-ever contestant with dwarfism.

“It’s been soooo hard keeping this secret as I’ve wanted to tell everyone. I’m going on Strictly Come Dancing!!”

Comedian Jayde was announced on August 6 on BBC Radio 5 Live, with Scott Mills – who previously appeared on the show – breaking the news.

Jayde said: “Since I watched the first series in 2004, I feel like every step I’ve taken in my career over the last 11 years was to be on Strictly.

“I cannot begin to express the emotions I am feeling, this means so much to me and my family.

“I’ve always watched it, apart from a brief hiatus in 2011 as I was relentlessly gigging every weekend (to try and get on Strictly),” she quipped.

:I’ve been a massive fan of the show for years. I feel like I’m watching myself in a dream and I can’t believe I’ve manifested this.

“Holding this in has been torture for me!” she admitted.

Loose Women star Kaye was announced live on the show on August 5 – after a lot of teasing.

Speaking on the show, she said: “Oh my god, she just said: ‘Poor you!'” Kaye said, pointing at her co-host Sunetra Sarker, who previously took part in the show.

Asked if she could dance, Kaye laughed as she confirmed: “No, I can’t dance!”

She then added: “I’m absolutely terrified.”

Carol McGiffin then asked her why she’d decided to sign up, with Kaye admitting she would regret it in September if she didn’t sign up.

He said: “This is a dream come true! I cannot wait to get in those sparkles and sequins and shimmy across the most famous dance floor in the world!

“Strictly is the ultimate feel-good show, as soon as I hear that iconic theme tune it’s just pure escapism.

“I’m going to have to cancel my legendary Strictly launch night kitchen party that I throw every year. I’m sure my friends and family will understand.

“It’s also a massive honour to be part of an all-male dance partnership, it’s so important we have that inclusion on such a huge show.”

Richie is an RTS award-winning presenter and is best known for his role on BBC Radio 2’s Breakfast Show, presenting the travel bulletins as well as hosting a wide variety of his own shows.

He’s also a regular on The One Show.

Upon being announced, Kym said: “I’ve considered doing Strictly for years but the timings never worked out.

“I’m so delighted that this year they have!”

She also said: “I’m a huge fan of the show and can’t believe I’m going to go from watching at home in my pyjamas to actually dancing in front of the judges in a glittery dress, it’s unreal!”

Famed for playing Jambo in Hollyoaks, actor Will Mellor was the first contestant to be announced for Strictly Come Dancing 2022.

His announcement came on August 4 on BBC Breakfast.

Appearing with hosts Naga Muchetty and Charlie Stayt, Will said he was “chuffed” to be taking part.

“I’m honestly so chuffed to be taking part in Strictly Come Dancing this year!

“Not going to lie, it’s totally out of my comfort zone and I know it will be a huge challenge but that’s what life is all about.”

Poignant reason for signing up

He added: “This is also my mum’s favourite show and she’s had a really tough few years so I’m doing this is for her as well. Bring it on!”

Not going to lie, it’s totally out of my comfort zone.

As a result, Will said he immediately said yes when the offer from the BBC was made.

He said: “My mindset completely changed a while back and I wanted to start doing things that scare me a bit.

“I lost my dad in 2020 and I just thought. I’ve got to grab life and do things, create new memories. My mindset changed. It’s my mum’s favourite show!”

As well as the celebrity contestants, four new professional dancers have also joined the Strictly gang this year.

The news of the newcomers joining the show broke last month when the official Instagram account shared a picture of the dancers.

The post read: “Welcome Carlos, Lauren, Michelle and Vito who join the show and become part of the biggest pro line-up in #Strictly history!”