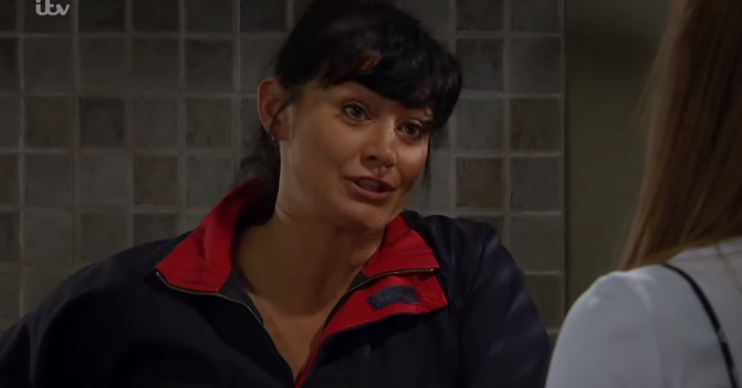 Amy has been getting close with Nate

Amy has no idea about Nate and Kerry’s fling and Kerry has tried her best to keep it secret.

Last month it was reported that Moira would have an affair with Nate.

Moira and Nate fueled affair rumours last week when Nate used her shower after the one in his caravan broke and the farmhand chatted to her with his top off.

Read More: Emmerdale SPOILER: Lydia finally faces the ghosts from her past

But tonight it seems like Moira is starting to get jealous of the time Nate and Amy are spending together and warns the mother of her stepson off Nate.

While Amy helps out Moira clearing the kitchen and looking after Isaac whilst she’s short-staffed on the farm, Moira brings up the topic of Nate.

When Moira suggests things are getting serious between Amy and Nate, Amy says they’re just having a laugh.

Moira then asks if she thinks she should be sharing her time with Kyle.

Moira goes on to say: “Well Nate isn’t exactly the settling-down type is he? Chances are he’ll have moved onto another job before winter.”

When Amy says “it’s just a kick about in the park”, Moira says it’s her choice but says that Amy is getting really close with her son Kyle and if it was her, she would cherish that and would “not let some bloke she hardly knows” get in the way.

While rumours of an affair abound, some viewers have predicted Nate is the son of Moira’s husband Cain and others are convinced he is Cain’s brother Nathan’s son, making Nate Cain’s nephew.