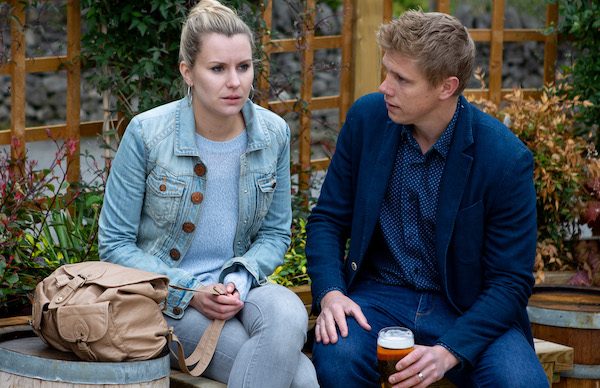 Has he gone too far this time?

Dawn Taylor finder herself in serious danger in next week’s Emmerdale when Robert Sugden‘s plan for revenge on Victoria Sugden’s rapist takes a sinister turn.

Ever since the fateful night that Lee Posner attacked Victoria in her own home following a night out, her brother Robert has been desperate to get revenge.

But despite the fact Victoria has been desperate for Robert to stay out of her problems after he put posters up around Hotten revealing Lee was a rapist, Robert just can’t let it lie and has been stalking his nemesis outside his own home.

With too little evidence to convict Lee of raping Victoria, Robert comes up with the plan to prove he is a danger to society by setting him up with a honeytrap, hoping that if he attempts to rape someone else then this time he will be there to get the evidence the police need.

When Robert finds out that Dawn is looking to make money so that she can support her son Lucas, he gets the idea to pay her to flirt with an unsuspecting Lee on a night out – in full view of CCTV.

Determined to stitch Lee up any way possible, Robert offers Dawn £500 to get Victoria’s attacker interested in her, but when he goes through the final plan, Dawn is worried that they’re playing with fire and demands more cash.

Eventually the pair come to an agreement and the honeytrap is on, but when Robert confesses his crazy plan to Aaron Dingle, he’s horrified that he would put Dawn in so much danger and the pair race to the pub where Dawn is targeting Lee.

Little do the pair know, it’s too late to put a stop to anything because Dawn is already chatting to Lee, who has taken a shine to her and asked her if she would like to go somewhere a bit quieter.

Knowing what Lee is capable of, Dawn starts to panic but decides that she doesn’t really have much choice but to go along with his request seeing as she’s being paid by Robert.

Is she about to find herself in serious danger as Lee strikes for the second time?

Or will Aaron and Robert manage to get to her before it’s too late?

Do you think Aaron and Robert will get to Dawn in time? Leave us a comment on our Facebook page @EntertainmentDailyFix and let us know what you think!