It's not much fun being Moira Dingle these days. If anyone in Emmerdale appears to have the woes of the world on her shoulders it's Moira.

Played with heart and humour, when she gets the chance, by Natalie J Robb, Moira is a woman who deserves a break from the day to day slog of her life.

She's had some fun in the past. Remember her affair with hot farm hand Alex Moss?

The tragic death of daughter Holly in 2016 hit her hard. Moira suffered postnatal depression after the birth of son Isaac and guilt for the murder of Emma Barton.

As our history of Moira's time in the Dales shows she's had a lot on her plate.

Who was Moira Dingle's first husband? 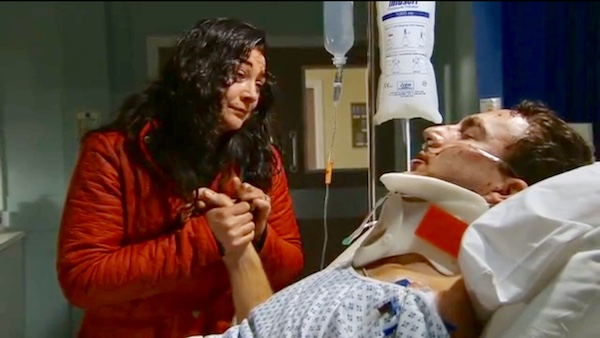 "My beautiful, beautiful John. Look what I've done to you." So said Moira to husband no.1 John Barton on his death bed after their 22 years of marriage came to an abrupt end.

Moira and John and the kids, Adam, Holly and Hannah, moved into Butler's Farm in 2009.

It was Moira's affair with Cain that tore her and John apart, even if he had previously been caught snogging flirty Eve Jenson (Suzanne Shaw).

One thing that Moira never told John even in his final moments was that she had also slept with his brother James and that their son Adam was actually James'.

Even though they reconciled folloing her affair with Cain, John and Moira were on their way to a romantic night at a hotel booked by their kids when black ice on the road ended their evening very differently.

How many children does Moira Dingle have? 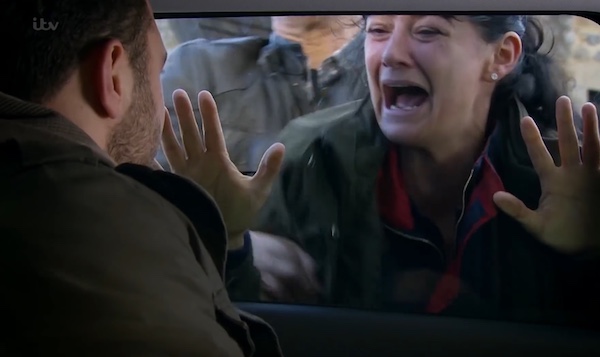 Adam (Adam Thomas) throws his life away for his mum (Credit: ITV/YouTube)

Moira had four children. Two with John, Holly and Hannah (who is now Matty), one with James, Adam, and one with Cain Dingle, Isaac.

She lost Holly to drugs and fears she may never see Adam again since he went on the run after he misguidedly took the blame for Moira killing Emma Barton.

Moira's relationship with Hannah, who now identifies, as Matty has improved but it has been a long process.

The same can also be said of young Isaac who Moira tried to give away when she suffered from postnatal depression.

Did Moira Dingle's daughter Holly die from a heroin overdose? 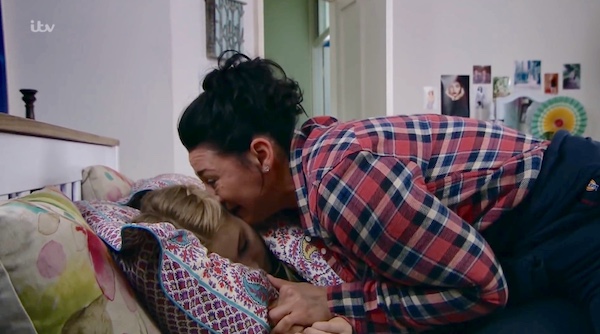 When Moira drew back the curtains in Holly's bedroom to greet a brand new day she had no idea of the horror she was about to discover.

"You've not drunk your tea. You're taking the mick now," she cheerfully scolded her daughter as she went to wake her and pulled back the duvet.

Even though Holly (Sophie Powles) had battled drug addiction for most of her young adult life it was one of Emmerdale's most surprising and shocking moments when she overdosed.

Holly had been in recovery and started to get work as a photographer. She was also seeing Jai Sharma who she had got to know at an NA meeting.

What problems have Moira and Cain had in their marriage? 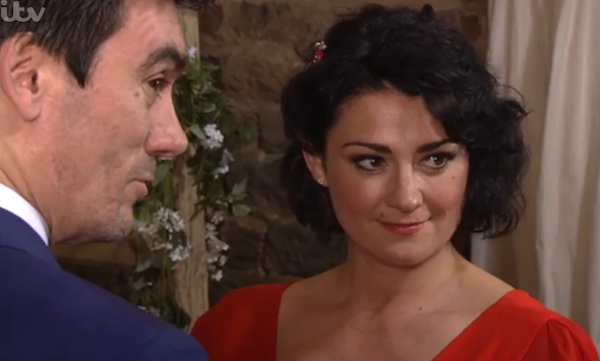 Till death or plenty of other things do us part... (Credit: ITV/YouTube)

Moira and Cain has been a match made very far from heaven with all manner of problems ready to tear their love asunder.

Their initial affair was instigated by Cain as much to wind up John Barton as anything else.

Although Moira did her best to keep it secret Cain couldn't wait to tell John how he knew about Moira's birthmark on her thigh.

After John's death Moira enjoyed a no-strings attached fling with tattooed farm hand Alex Moss but Cain eventually won her back by dialling up his bad boy image with the help of a motorbike.

Both Holly and Adam did their best to put their mum off Cain and when a still lovestruck James Barton showed up Cain had even more of a fight on his hands.

Despite all that, Moira and Cain married in 2015. It was Holly's return from London with a still raging heroin addiction that was their first major marriage hurdle.

When an unsympathetic Cain deleted a voice message cry for help from Holly Moira chose her daughter over her husband.

That catapulted Cain back into the path of Charity for one last spectacular attempt at their own happy ever after.

Moira's one night stand with Pete Barton and Cain's love amongst the cassocks with vicar Harriet haven't helped but now with Isaac they seem on an almost even keel. 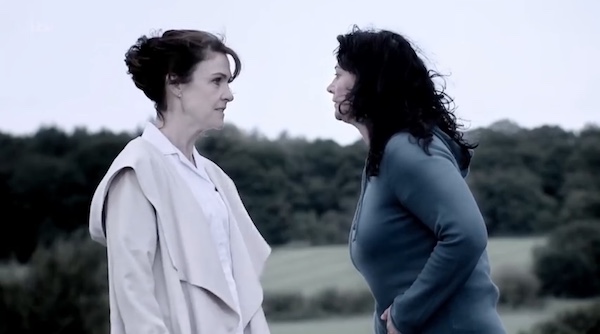 It was Emma herself who made Moira do it. After accidentally shooting her own son Finn and pushing James off that bridge Emma didn't want to live.

Stood on the viaduct she goaded Moira by saying every cruel thing she could think of about Moira and her loved ones.

Moira tried to walk away from her but when Emma said to her, "You might as well have injected the heroin yourself" Moira snapped.

The blissful smile on Emma's lips as she fell to her death was the hope that she had done for her arch rival who she hated because James loved Moira more.

When did Moira Dingle suffer from postnatal depression? 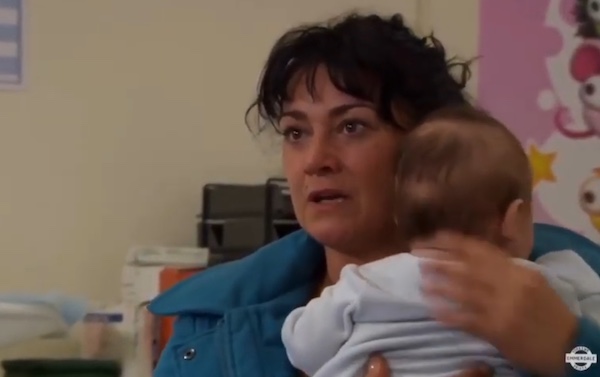 Moira was diagnosed with postnatal depression after the birth of her son Isaac who she was convinced was going to die.

"I sit up all night watching and listening to him sleep knowing that at any minute he's going to stop breathing, like Holly did."

Moira walked out of Isaac's christening and later handed him over to Victoria and Adam who were trying to adopt.

Slowly with the help of Faith, Cain and her family Moira has bonded with Isaac. A great weight was lifted when she admitted to Cain that it was she who had pushed Emma to her death.

How did Moira Dingle support Hannah's transition to Matty? 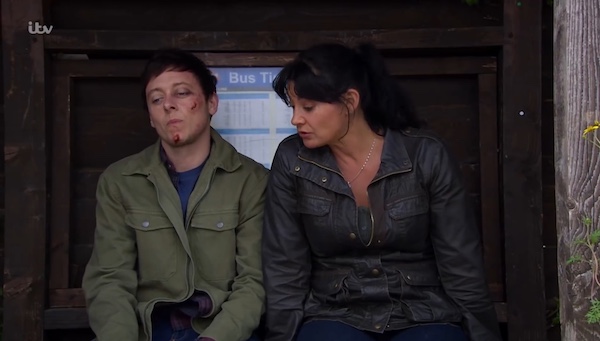 "I can't even recognise my own child anymore." Initially Moira didn't cope at all well when Hannah returned as Matty.

Moira blamed him for not coming home for his sister Holly's funeral. Matty explained that wasn't possible as he was in the middle of his treatment.

It took a while and Moira acknowledged that she had a lot of making up to do. There was another hiccup when she caught Matty kissing Victoria.

Even when Matty went for his top surgery she was still struggling, worrying about the drugs he was taking and calling him Hannah at one point.

"I'm not saying I'm always going to get it right but I'll try." 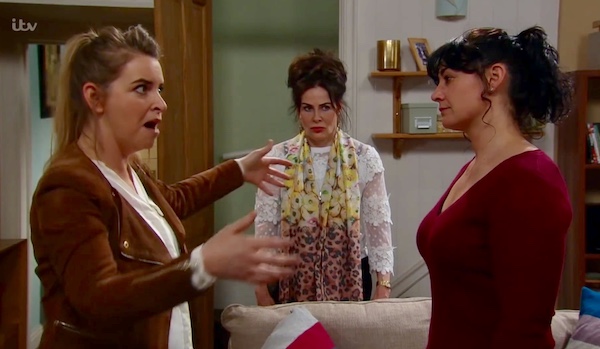 "A gift from Glasgow," Moira called it when she head butted Charity after she mocked her with her best Braveheart impression. Faith saw it coming. Charity didn't and got a very bloody nose for her troubles.

What's your favourite Moira Dingle moment? Leave us a comment on our Facebook page @EntertainmentDailyFix and tell us!