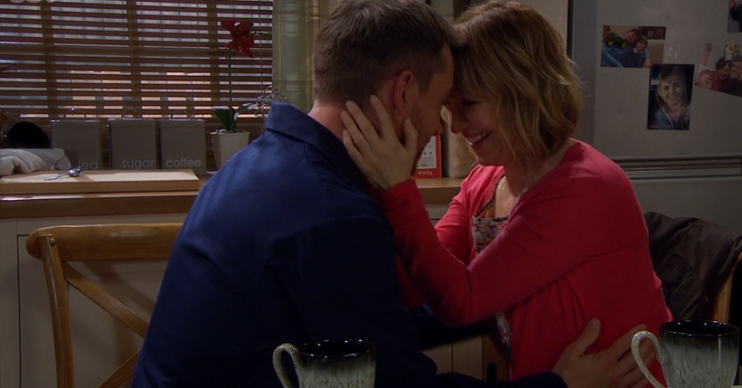 Emmerdale viewers are not happy as Pete and Rhona get engaged

Viewers of ITV’s Emmerdale are not happy that Pete Barton and Rhona Goskirk have got engaged.

Fans have already begged for the pair to split up, but it looks like that isn’t happening anytime soon as they are now preparing to wed!

It’s been a tricky few months for Rhona as she’s survived an accident on the farm, which left her needing an emergency hysterectomy.

Now going through an early menopause, viewers have seen her becoming increasingly cranky and taking it out on her partner Pete.

She’s also been unfaithful to Pete during Emmerdale’s Big Night Out where she kissed newcomer Nate.

Shortly after, Nate began working on Butler’s Farm with Pete and he revealed Rhona was all over him on the night out.

Despite being hurt and upset, Pete eventually forgave his other half, but it hasn’t been smooth sailing.

Whilst Rhona has continued to struggle with the changes her body is going through, her mood swings have often caused arguments between the pair.

There has also been some jealousy between the couple.

In Friday night’s episode (June 21), after an argument with Rhona, Pete helped Kim Tate get her car out of the mud and the pair ended up sharing a kiss.

When Kim threatened to use that against Pete he told Rhona the truth.

Read More: Emmerdale’s Ash Palmisciano reveals he was told it was “unrealistic” to be an actor

Of course Rhona wasn’t happy but things took a turn when Pete told her: “I would marry you tomorrow if I could,” and proposed.

When Rhona didn’t know what to say, he stormed out and ended up staying at Moira’s that night.

The following day, she turned up and said she knows what she should have said prompting Pete to get down on one and propose again.

This time she said “Yes” and the pair went to celebrate in the Woolpack.

Although Pete and Rhona and their family and friends seem to be happy for them, Emmerdale viewers are not.

Rhona and Pete getting engaged is the WORST idea #Emmerdale

As if Rhona & Pete are going to get married, I have never ever seen them happy #Emmerdale #worsecoupleever

Pete and Rhona, been together 5 minutes, done nothing but argue, are getting married. FFS#Emmerdale

Rhona and Pete are getting married when all they ever do is argue #Emmerdale pic.twitter.com/5PEgYx4pyx

What do you think of Pete and Rhona getting engaged? Leave us a comment on our Facebook page @EntertainmentDailyFix and let us know what you think.