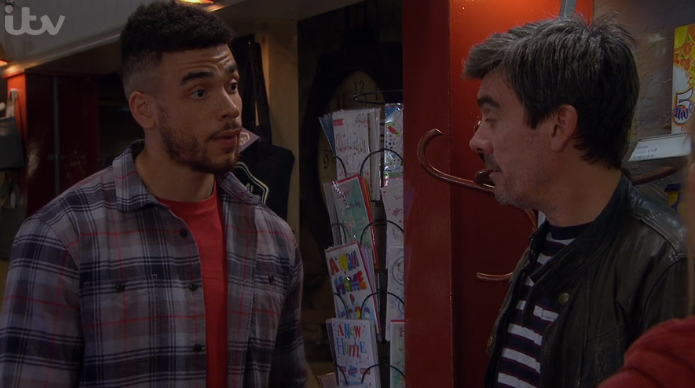 Is Nate a secret Dingle?

Emmerdale fans have a new theory about who Nate is after his supicious behaviour towards Moira Barton intensified.

The farm hand conveniently found his way to the village to work on Butler’s Farm and has been seen growing closer to the women around Cain Dingle’s life.

He has slept with Kerry Wyatt, is now sleeping with Amy Wyatt and has been seen to be growing closer to Cain’s wife Moira.

There have been reports that Nate will seduce Moira in upcoming scenes and fans think they know why.

They have come up with a new theory that claims mysterious Nate is actually Cain’s secret nephew who has come to the village to take revenge on the Dingles for his dad – Cain’s estranged brother Nathan.

Nathan is the son of Zak and Nellie Dingle and has been estranged from his family ever since they ruined his wedding by starting a huge fight.

He has been mentioned occasionally over the years but never been seen – and fans think Nate has come to take revenge himself.

One said on Digital Spy Forums: “Nate is certainly being very manipulative, and is just basically using Amy and wants to hurt and harm Moira and Cain’s relationship.

“It just comes across as having more to it than him only wanting to get into Moira’s overalls.”

A second said: “Cain has a half-brother Nathan who is estranged from the Dingle family. He’d obviously be too old to be Nate, but maybe Nate is Nathan’s son?”

However, another had an intriguing theory that Nate is Kim Tate’s revenge after she vowed to destroy the couple for refusing to sell the farm to her.

She vowed revenge after trying to force Cain to sleep with her to break up their marriage.

The fan said: “I think Nate is Kim Tate’s threatened revenge on Moira and Cain for thwarting her plans.”