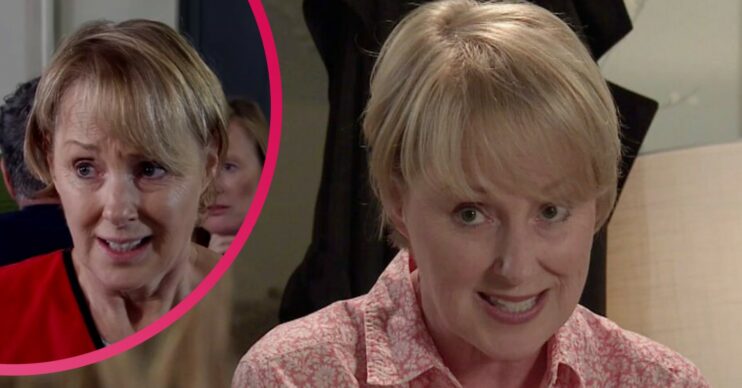 Who is Sally Metcalfe in Coronation Street? When did she go to prison?

Sally Metcalfe has been in Coronation Street for 35 years and she is nothing if not persistent.

As she goes head to head with Maria Connor in a bid to get back on the local council, she’s also determined to help Stepdaughter Faye get out of prison.

After all, Sal knows only too well how awful it can be inside after being convicted of fraud and sent down in 2018.

Of course, saintly Sally was totally innocent. All she’d been guilty of was trying to better herself and her community. But that counts for very little in Soapland.

Thank goodness she finally acquitted and released. However, prison isn’t the only battle she’s faced during her time on the cobbles…

Beautifully played by Sally Dynevor, Sally has grown in all sorts of unexpected ways. Most testingly both character and actor dealt simultaneously with breast cancer in 2010.

Since the genius pairing of Sally and Tim Metcalfe the added string to both Sallys’ bows has been their effortless ability to switch from drama to comedy.

One minute Sal can be collapsing in court over those shock guilty verdicts, the next she’s coaching her fellow inmates in Conversational Spanish. It’s been quite a ride…

When did Sally first arrive on Coronation Street?

Sally Seddon was originally only intended to appear for four episodes back in 1986. It started with Kevin Webster accidentally soaking her with his van. 35 years later she’s still going strong.

Back then Kevin was Hilda Ogden’s lodger so Sally managed to get her feet under the table at no.13.

Hilda wasn’t a fan at first but when she clocked how bad Sally’s home life was she relented, just as long as there was no funny business with Kevin.

Even in her early days Sally was keen to move up the social ladder. Although she could come across as pushy this was mostly thanks to her own unstable childhood.

When was Sally on the local council?

“Metcalfe residence. Sally the Mayor speaking.” No job position has given Sally more joy (until it all went pear-shaped) than being elected Mayor of Weatherfield.

Before that, Sally’s principal jobs were at Underworld. She was a clerical assistant in the days of Mike Baldwin and has been back there as a machinist since her time in prison.

Sally loves to play shop steward and was the first to down tools and lead her fellow workers out on strike when Carla tried to outsource their jobs to robots in Milton Keynes.

Does Sally have kids in Coronation Street?

Daughters Rosie and Sophie, born in 1990 and 1994, have both given their mother plenty of sleepless nights.

The revelation that Rosie had inadvertently become a drug mule after doing a modelling job left Sally incredulous. As did Rosie having an affair with her teacher John Stape (who Sally fancied).

When Sophie came out to her mum as gay and then tried to elope with best pal Sian Sally feared they were rushing into things. When Sophie dated Sally’s old school pal Paula she was even less impressed.

Sophie and Rosie though stick by their mum. They helped hunt down her troll, Auntie Gina’s stepdaughter, Leah. As Rosie put it: “No one makes a mug out of Sally Metcalfe.”

Who is Sally Metcalfe married to?

Kevin Webster can lay claim to being Sally’s husband twice. He’s the father of her children and there is still a strong bond between them.

In the end though the major sticking point was Jack, Kevin’s lad by Molly Dobbs (Vicky Binns) before that tram landed on her. Try as she might Sally can’t get past the result of that betrayal.

When window cleaner Tim Metcalfe came along he and Sally looked a classic mismatch. She was always trying to improve him, he just wanted a quiet life.

Lying arch manipulator Duncan Radfield almost destroyed Tim’s trust in Sally which was heartbreaking but together they have proved one of Corrie’s greatest partnerships. Even Tim’s nasty father Geoff Metcalfe couldn’t break them up.

There was a slight bump in the road (one of many) when Sal discovered Tim had got married in Vegas and didn’t believe it to be legal. The news meant Sally and Tim weren’t actually hitched.

But the pair put it behind them and married for real in 2020.

Sally has not had that many great pals over the years. One of her best mates has been Rita who took her under her wing when Sally was pregnant with Sophie.

One of the unlikeliest pairings is Sally and Abi. Not every mate would get away with smashing you in the face but Sally was immensely grateful to Abi when she did in prison to buy her some time with her trial.

Sally was so grateful that she told Abi she could lodge with them. Turning Abi into a bit of a pet project, it wasn’t long before Sally had Abi role playing with Tim for job interviews.

Ironically, prison has opened doors for Sal. It meant she could even share jail time anecdotes with Gail over a few drinks in The Rovers.

Where is Sally’s sister, Gina?

Considering Duncan framed her, got her sent to prison and nearly destroyed her marriage you’d have thought he would be Sally’s public enemy number one.

In fact that honour goes to her sister Gina. That’s Gina who helped get Sally sent down then tried to sleep with Tim whilst her sis was banged up.

“We used to be like two mud larks on a twig,” said Gina on the factory roof before Sally fell through it.

“Go away and leave my family in peace,” said Sal. You can hardly blame her.

Gina did in fact leave for pastures new, but the sisters were on reasonable terms when she went.

When did Sally go to prison in Coronation Street?

Coronation Street is used to having its residents sent down for crimes they didn’t commit. Sally’s reaction in 2018 when the judge gave her a four year custodial sentence was, though, one of the most devastating.

Prison almost broke her. She was beaten up by drug dealer Marcia and thought Tim had abandoned her. But Sally Metcalfe fans know that she is made of sterner stuff.

Sally has overcome breast cancer, abuse by 90s boyfriend Greg Kelly (Stephen Billington), a minibus crash, and plummeting through the roof of Underworld.

What’s next for Sally?

Sally is determined to get Faye out of prison and has asked Debbie to help her do it.

She knows Debbie is the only one with a connection to Ray Crosby, the man who sexually assaulted Faye.

Faye then attacked him in the Bistro, only she mistook Adam Barlow for evil Ray and nearly killed him instead. Sal hopes that if Ray confesses they can prove mitigating circumstances and get Faye released.

Meanwhile, Sally is also running for local council. She’s pitting herself against Maria Connor and is certain she’s the right woman for the job.

But we all remember how her shot at local government turned out last time, so will this one end in tears too?