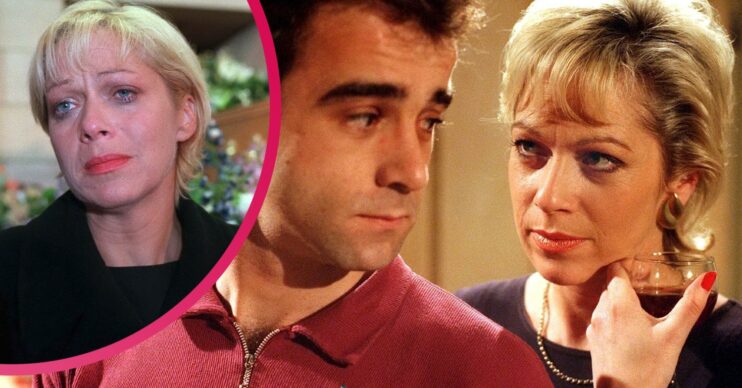 Natalie Barnes in Coronation Street: How old was Denise Welch when she played her?

Natalie's time on the cobbles wasn't a very happy one! But we'd love to see her back in Weatherfield.

Natalie Barnes in Coronation Street was the glam garage owner who came between Sally and Kevin Webster.

She was mum to troublemaker Tony Horrocks, and devoted wife – and then widow – of Des Barnes.

She came to the Street to run the garage but later bought the Rovers. And she became a bit of a Corrie legend while she was at it!

So what was her story?

When did Natalie arrive in Corrie?

Natalie arrived in Coronation Street when her son Tony Horrocks – who ran the garage with Kevin Webster – had a breakdown.

Tony had accidentally run over and killed someone and he couldn’t cope.

So Nat stepped in, and it wasn’t long before she and Kev were having a steamy affair even though he was still married to Sally.

Natalie and Kevin’s affair shocked viewers, the Weatherfield locals and – when she eventually found out – Sally!

Kev left poor Sal and moved in with Natalie.

But by Christmas 1997, Kevin was regretting leaving his family. He went back to Sally, and heartbroken Natalie left the garage.

Natalie got a job working in the Rovers, and made friends with fellow barmaid Samantha Failsworth and her boyfriend Des Barnes.

When Samantha and Des broke up, the heartbroken barmaid went off the rails and began stalking her ex and Natalie, convinced they were together.

They weren’t then, but eventually they did start a romance.

Natalie and Des tied the knot but Natalie’s son Tony arrived back on the Street with big problems. He’d got into debt with some dodgy drug dealers.

One night, Tony was attacked by the dealers but Des happened to be there too. He tried to help, but the dealers fought back and Des hit his head. He died later in hospital and Natalie was devastated.

Wanting a new start after losing her husband she bought the Rovers and became the new landlady.

Natalie suffered more heartache when Tony’s body was discovered. She tried to find out who had killed him – in fact it was evil Jez Quigley, but though he was arrested and charged, he got away with it.

In her time as landlady, Natalie had a few flings, including with Sharon Bentley‘s husband, Ian, and eventually met a chap called Vinny.

What happened to Natalie Barnes in Coronation Street?

Vinny wasn’t a great bloke and cheated on poor Natalie with her own sister, Debs. He and Debs eventually left Weatherfield together, unaware that Natalie was pregnant.

Though she was upset and angry about Vinny’s betrayal, Natalie decided to keep her baby – but she also chose to leave Coronation Street.

She sold the pub to Duggie Ferguson, Mike Baldwin and Fred Elliott, and left Weatherfield for a new life in County Durham.

In 2001, barmaid Geena Gregory told drinkers in the Rovers that Natalie had given birth to a little girl called Laura.

Laura would be 21 now – could she and her mum return to Corrie?

Natalie was played by established actress Denise Welch. She was already a household name having appeared in shows such as Auf Wiedersehen, Pet and Spender. She’d also been in Soldier Soldier and had a hit record!

Since leaving Corrie, Denise has had a super successful career. She’s a regular panel member on Loose Women, has had roles in Waterloo Road, Down to Earth, and Benidorm.

She appeared in EastEnders as Alison Slater – Stacey Slater’s secret stepmum. And most recently she’s been in Hollyoaks as Maxine’s troublesome mum Trish Minniver.

She was also in Dancing on Ice in 2011 and won the 2012 series of Celebrity Big Brother.

Denise has two sons with her ex-husband Tim Healy including Matty Healy, lead vocalist in the band The 1975. She’s now married to artist Lincoln Townley.

How old was Denise Welch when she played Natalie Barnes?

When she joined Coronation Street as Natalie Barnes her first episode aired in February 1997.

Are Denise Welch and Gabrielle Glaister sisters in real life?

Debs was Natalie Barnes’ sister and she stayed on the cobbles for nine months.

Gabrielle left the soap in November 2000 when Debs ran off with Natalie’s boyfriend Vinny.

Although the casting was excellent as Denise and Gabrielle look similar, the ladies are not in fact related in real life.