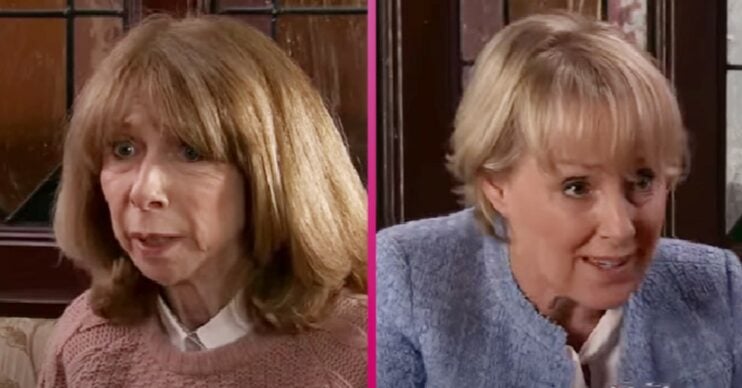 Sally opened up to Gail about her sex life

Sally was furious after her husband Tim, who has just had heart surgery, took an erectile dysfunction tablet for their romantic getaway.

She ended up confiding in good friend Gail and their sex talk left viewers in stitches.

Read more: Coronation Street’s Gail: How many times has she been married?

Coronation Street: Sally opens up to Gail about Tim

A few months ago, Tim had a triple heart bypass.

Sally and Tim were told they were unable to have sex until Tim was given the all-clear from his doctor.

When they were finally able to be intimate, Tim began struggling with impotence.

Sally was desperate for him to go to the doctors.

Recently he lied to Sally that he had been the doctor and had been told it was normal after a big operation.

In last night’s scenes Sally and Tim went off for a romantic night in a hotel, which they won in a raffle.

However Tim tried to delay their departure so his erectile dysfunction tablets, which he secretly ordered online, could arrive before they left.

When they didn’t turn up in time, Tim asked Gail he was waiting for a package and asked if she could let him know when the post arrived.

At the hotel, Gail let Tim know his package arrived and he raced across town to collect it.

He took the tablet and back at their hotel room Sally and Tim prepared to have sex when he realised his heart was beating very fast.

Panicking, Sally called for an ambulance.

At the hospital, Sally told the doctor that Tim took a tablet for erectile dysfunction.

The doctor warned that although medication is fine, he should check with the doctors before taking anything and suggested he speak to his doctor about the best tablets to take.

The doctor said it looked like Tim had a panic attack and was okay to go home.

Later Sally and Tim got into an argument and he told his wife that he lied about seeing the doctor.

Tim told Sally she’d been putting pressure on him and called her “sex mad.”

She stormed out and went for a drink in the Rovers with Gail.

When Gail told Tim about coming back for a package, Sally opened up to Gail.

She told Gail how Tim wanted it to be a special night to he “bought some pills.”

Immediately Gail thought Tim had bought ecstasy, but Sally told her it was for erectile dysfunction.

Sally opened up about her husband’s impotence and everything they tried to get Tim going.

Sally asked Gail if any of her past husband’s had similar issues.

Gail revealed her late killer husband Richard Hillman use to have ‘a lot of trouble’ and get very frustrated.

She even said she wondered if that was the root of all his problems.

Coronation Street viewers were in hysterics at the scenes between Gail and Sally, branding it ‘comedy gold.’

That was comedy gold tonight #Corrie

Not sure who wrote tonight’s episode of #corrie but LOL… absolute comedy gold. My personal favourite was “He’s done 7 years of medical school Tim, what do you want him to call it? A winkie?” 🤣👏🏼

Fantastic episode of @Corrie last night! I was howling watching Gail and Sally in The Rovers but as always the writers bringing to light an important issue. #Corrie #Sally #Gail

#Corrie was hilarious tonight, Tim in the car, Sally and Gail in the Rovers, Sally in the hospital to the doctor. Absolute gold. Well done, Corrie.

Just finished watching #Corrie tonight, a great episode. As important a topic it is to raise with Tim Sally was just hilarious tonight especially the conversation with Gail. The “winkie” and “ecstasy” lines were funny.

#Corrie was absolutely on it tonight with the scripts 😂😂😂 Sally’s line’s to the Dr & when her & Gail were chatting were so funny. Proper classic Corrie.

While I love the drama in #corrie, it really comes alive with comedy. So funny tonight with Sally, Tim, Steve, and Gail.

#Corrie Sally Tim and Gail. Pure comedy gold tonight! "Who do you think we are? The Happy Mondays?" 🤣🤣

How old are Gail Rodwell and Sally Metcalfe?