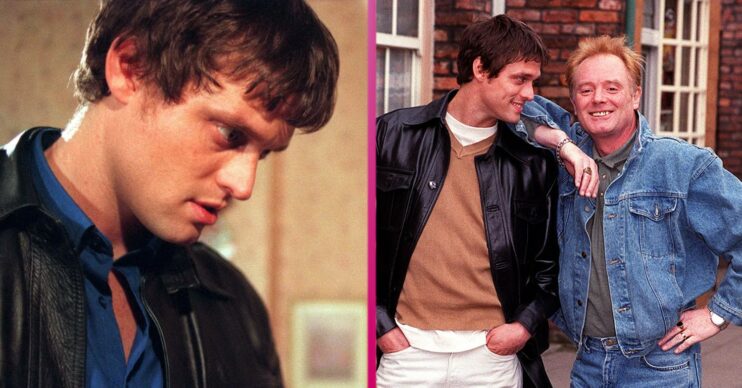 Greg Kelly in Coronation Street: Who was he? What’s his dark history with Sally Metcalfe?

He's still got family connections in the Street. Could he return to cause trouble?

Greg Kelly in Coronation Street was a manipulative con man and thief, who seduced Sally Webster, as she was then, and swindled Mike Baldwin.

And he was related to that Weatherfield legend Les Battersby.

He was a classic Corrie villain!

So what was his story?

Who was Greg Kelly?

Greg was Les Battersby’s long-lost son – the result of a holiday fling when Les had been working on a fairground. Greg, who worked in fashion, had been cut off by his mum and tracked down Les in the hope of getting his mitts on some money.

He realised quite quickly that Les wasn’t going to be the cash cow he’d hoped and turned his attention to the factory instead.

While romancing Maxine Heavey, Greg convinced Mike Baldwin to take him on as a business partner.

While he was working with Mike, Greg spotted Sally Webster. She was married to Kevin at the time, and bringing up her two girls. But she was vulnerable because she was grieving for her mum – who’d recently died and left her a hefty inheritance.

Can you see where this is going?

Greg seduced Sally, and moved into the flat above the Kabin with him and the girls.

Greg was not a family man! Sally realised she’d made a mistake but it was too late.

Determined to get his hands on the wonga, Greg stole Mike’s business contacts from the factory, got Sally to ‘invest’ and opened his own shop.

But Mike wasn’t giving in that easily, and instead he took the contacts back. Greg’s business began to fail – and he took his frustration out on poor Sally.

In shocking scenes, he lashed out at her.

Knowing he couldn’t make his business work without Sal’s money, Greg promised it was a one-off.

But soon he was hitting her again, and this time Sally grabbed the girls and fled to Rita Sullivan.

With his business having failed, and having been forced to move in with Les and his family, Greg blamed Sally for all his troubles.

He started stalking poor Ms Webster, and threatening her. She was terrified!

On New Year’s Eve 1998, Greg broke into Rita’s flat and threatened her.

Scared for her life, Sally fled to the Platts’ New Year’s Eve party, and luckily Greg was arrested.

Greg was played by actor Stephen Billington. He’d made his name in the adaptation of the saucy Jilly Cooper novel The Man Who Made Husbands Jealous.

He shot to fame as evil Greg and won Best Villain at the 1999 British Soap Awards.

Since he left Corrie, he has appeared on stage many times and has also taught acting at several different theatre schools.

And in 2013 he joined Hollyoaks as Danny Lomax – the dad of Leela, Tegan and Ste.

We’d love to see Greg causing trouble in Corrie again one day. After all, sister Leanne is still in Weatherfield. Could he return?