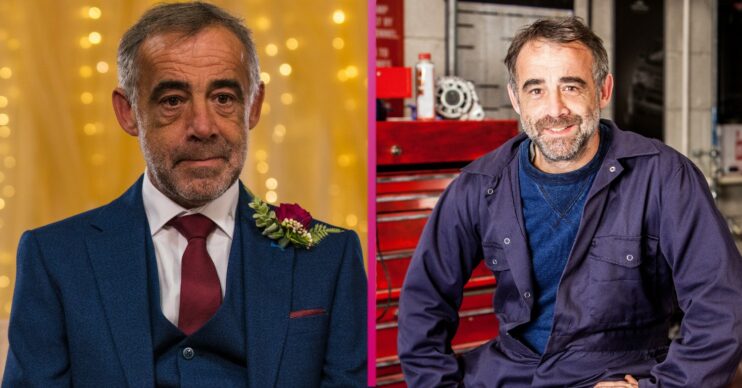 Kevin Webster in Coronation Street: His kids, his wives and the secret that could ruin his life

Everything seems calm right now but will he find out the truth?

Kevin Webster in Coronation Street is one of Weatherfield’s most recognisable characters.

He’s been on the Street for almost thirty years, and during that time Kev’s coped with the break-up of his marriage, the birth of his children, the loss of his baby boy, affairs, disasters and dramas.

And that’s not the half of it!

Kevin is played by actor Michael Le Vell. He joined the show in 1983, when he was just 19 years old. He actually auditioned by mistake!

He went to try out for another show, but the casting director assumed he was there to audition for Corrie.

Off-screen, Michael’s life is almost as dramatic as his alter-ego’s.

He married his one-time Corrie co-star Janette Beverley in 1986. Janette played Elaine Pollard in Coronation Street before going on to star in comedy series Sharon and Elsie.

Michael and Janette had two children but they split in 2011. They separated due to Michael’s struggle with addiction and sexual assault charges brought against him.

Michael took a break from Corrie while the charges were being investigated. He was found not guilty and returned to the show. Though the cost of fighting the case left him with money problems.

Kevin’s early years on the Street

Kev was a lodger with Hilda Ogden when he first came to Weatherfield. His dad Bill and sister Debbie soon followed. Kev loved Hilda and saw her as a second mum. In fact, he stayed with her after Bill and Debbie moved away and worked with Brian Tilsley at the garage.

In 1986, Kevin met Sally Seddon. Hilda didn’t think Sal was good enough for Kevin at first, but the pair wed and settled down together.

After Hilda moved away, Kevin and Sally bought her house.

Kevin and Sally had a rocky relationship. After the birth of their daughters Rosie and Sophie, Kev had an affair with Natalie Horrocks.

Though Sally forgave him, she later cheated on him with Greg Kelly and the pair divorced.

Kevin started a relationship with Alison Wakefield and the pair married. Alison had a baby boy called Jake, but the tot died soon after he was born from an infection.

Mad with grief, Alison snatched baby Bethany Platt and – after giving the baby back to Kevin – took her own life.

It took Kev a while to get his life back on track but after a while he and Sally reconciled and eventually remarried.

But Sally cheated again, with car dealer Ian Davenport, and then Kevin suspected her of having an affair with John Stape. Though it was actually daughter Rosie who was having the affair with John.

Kevin was sent to prison after beating John up.

Kevin was running the garage with his best friend Tyrone Dobbs when he started a relationship with Molly – Ty’s wife.

Kev planned to leave Sally but when she was diagnosed with breast cancer he decided to stand by her.

Molly, though, was pregnant. She was hurt by Kevin choosing Sally over her and told Tyrone about her baby. He was delighted. They named their son Jack, after Tyrone’s father-figure Jack Duckworth.

But when the tram crashed into Coronation Street, Molly was trapped in the wreckage with Jack.

Molly managed to give baby Jack to Sally, and as she was dying confessed that Kevin was his dad.

Sally and Kevin’s marriage didn’t survive that revelation and the pair divorced again.

Since then, Kev’s had a lottery win, supported his daughter Sophie through the loss of her girlfriend Maddie, and had a disastrous romance with Jenny Bradley – now Jenny Connor – who was still mourning the death of her son.

He also had a romance with Anna Windass, who left Weatherfield after stabbing serial killer Pat Phelan, and coped when son Jack had his foot amputated after developing sepsis.

Never one for an easy life, Kev fell for Abi Franklin. Their relationship is even more bumpy than Kev’s marriage to Sal.

They’ve got through the murder of Abi’s son Seb, and the involvement of Kev’s sister Debbie with Ray Crosby.

And they finally tied the knot last year.

But viewers know that Abi slept with Imran Habeeb and while Abi and Imran are the only ones who know the truth at the moment, secrets never stay buried for long in Soapland.

For a while Abi thought she might be pregnant but she told Imran it had been a false alarm. Was that the truth?

Meanwhile, Imran and Toyah are planning a wedding and Imran has promised there will be no more secrets. Except for the fairly huge secret he’s keeping about who he slept with.

It seems things are getting tricky in Weatherfield.

Is Kev’s happy marriage about to fall apart?