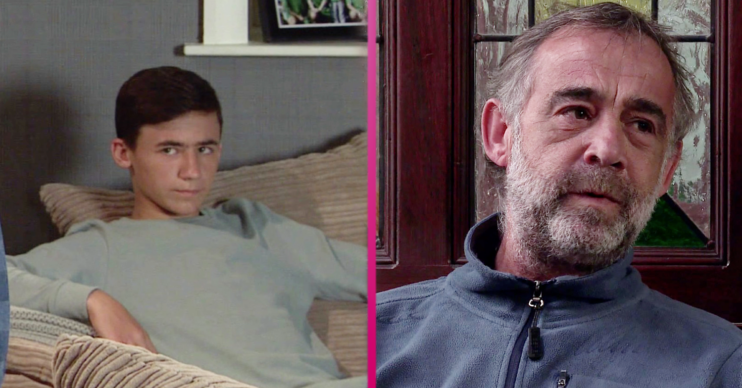 Who plays Jack Webster in Coronation Street? How old is Kyran Bowes?

Jack has been in Corrie since 2010

Jack Webster has been in Coronation Street since 2010, but who is he and who plays him?

Who is Jack Webster in Coronation Street?

Jack Webster is the son of Kevin Webster and Molly Dobbs, born September 6 2010.

He is the half-brother of Rosie Webster, Sophie Webster and the late Jake Webster.

Molly was married to Kevin’s best friend Tyrone Dobbs, however she had been having an affair with Kevin and fell pregnant.

Tyrone believed Molly’s son was his and when he was born they named him Jack, after Jack Duckworth.

However after Jack’s birth, Kevin stole one of his dummies and a DNA test proved he was Kevin’s son.

In December 2010, Molly admitted to Tyrone he wasn’t Jack’s father and went to leave Weatherfield.

However when Molly took Jack into the corner shop, a tram derailed and crashed into the shop.

Jack was rescued. Kevin’s wife and Molly’s friend Sally went into the rubble and she admitted to Sally that Kevin is Jack’s father.

Jack went to live with Tyrone. He is now 10-years old, due to turn 11 next month.

Jack is played by Kyran Bowes. Kyran took on the role in 2016, taking over the role from twins Jaxon and Maddox Beswick.

However fans were recently shocked by his most recent appearance, surprised at how much he’d changed.

When did Jack Webster get so old? And why the hell did he just stand by while Liam was casually dying? #corrie

#corrie as Jack got a new head he looks different

In 2015, Kevin began dating Jenny Bradley and it became apparent Jack and Jenny were bonding.

However she became obsessed with Jack due to the death of her own son, Tom, who died in 2013 at the age of four.

Jenny devised a plan to abduct Jack but she was caught out by Sophie’s girlfriend Maddie Heath.

Maddie tried to alert Sophie but ended up being killed after being caught up in an explosion at the builder’s yard.

During Maddie’s funeral Jenny took Jack to an apartment in Hull where they planned to stay.

Jenny wanted him to celebrate her late son birthday with him, but Jack wanted his dad.

She called Rita and she soon showed up with Kevin and Sophie. Jenny ended up giving Jack back to Kevin.

In July 2018, Jack was diagnosed with sepsis after cutting his leg playing football.

His body wasn’t reacting to antibiotics as well as the doctors hoped he would and they were forced to amputate his foot and part of his lower leg in order for him to survive.