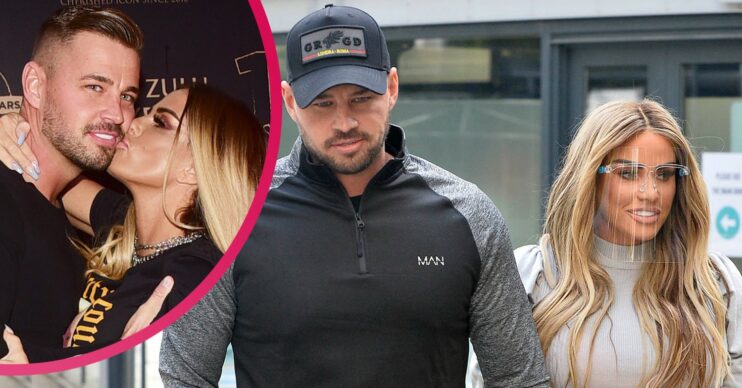 What really went on during their relationship?

Katie Price has reportedly called time on her romance with Carl Woods after nearly two years together.

The former glamour model had previously announced their decision to tie the knot later this year, before things seemingly fell apart.

So, from court appearances to baby speculation, here’s everything you need to know about Katie and Carl’s romance – and the reason behind their split.

When did the couple meet?

According to reports, the couple met through mutual friends before dating for nearly two years.

The pair made it Instagram official just a few weeks after they had officially got together.

At the time, a source also claimed: “Katie wasn’t looking for love or a serious relationship but just weeks after meeting Carl, she fell head over heels for him.

“She’s surprised how fast they clicked. He’s her ideal man, really: he’s got a job and his own money, he’s fit, they have a laugh – and she really fancies him.”

In addition, they added: “He’s told her he’s not interested in being famous or another “Mr Pricey” – he just wants to be with her.”

Before meeting the mum-of-five, Carl briefly appeared on Love Island in 2016 and ITV2’s Killer Camp in 2018.

Despite appearing happier than ever, it didn’t take long for trolls to attack Katie’s new relationship.

The reality star, who has previously been married four times, came under fire for quickly jumping into the relationship.

Following the backlash, she hit back: “We’re not going to have anyone try and ruin us, make up stories, this and that, it’s not gonna happen. I love this man, he is my today, my future, my everything.”

When Carl Woods pop the question?

Carl popped the question to Katie in April 2021, just 10 months after the pair first got together.

Katie said: “I know so many people out there are like, ‘Oh yeah, we’ve heard this before.’

“Yeah, because I’ve rushed into things so much, made wrong choices but my head wasn’t right. My head is so right now, I’m a different person.”

Furthermore, Carl insisted Katie had “changed” for the better.

After previous speculation of a Vegas wedding, the pair were finally expected to tie the knot this year.

Katie announced the news during an interview on ITV’s Lorraine, saying: “We’ll be getting married this year, IVF, happy. I can’t wait to have more kids.

“I’ve been with Carl nearly two years now and unfortunately for Carl, I broke my feet a month into our relationship.”

Speaking about starting a family with Carl, she added: “We’re doing the IVF route. Although I feel young, my body is not.

“Each cycle you have, you lose eggs each time. I didn’t know that.

“Obviously I’m 44 this year and I haven’t got as many eggs as I wanted so we’re having to do IVF and we are doing it.”

‘I’ve definitely found the one’

It followed after Katie and Carl were spotted at a fertility clinic in January this year.

Katie previously said: “This is the year for me, babies, marriage. I want it all. I’ve definitely found the one.

“We will get married and it will be in England.

“It always will be in England because the family are there, my mum’s terminally ill so she can’t travel, so I’d never get married unless my mum was there as well.”

Carl was in court to answer charges of threatening, abusive or insulting behaviour.

He was charged under section 4 of the Public Order Act with using threatening, abusive or insulting words or behaviour last month.

Prosecutor Leigh Hart told the court: “On the evening of the 22 August 2021 the defendant got into an argument with his partner at his home address.

“This resulted in his partner leaving his property to go to another property. The defendant followed her and attempted to force the door of that property and was heard shouting outside in the street which was overheard by neighbours.”

Read more: Katie Price and Carl Woods ‘break up and call off engagement’

However, the ex-reality star pleaded not guilty to the charges.

Shortly after appearing in court, Carl broke his silence with a cryptic social media post about “loyalty”.

He shared the post alongside a shot of himself and his dog Sid.

After spending the day with Katie, he wrote: “This is what loyalty looks like.”

Carl has since deleted photos of himself and Katie from his social media profile.

Has Katie Price called time on her relationship to Carl Woods?

According to The Sun, several sources close to Katie and Carl have said they’ve called time on their relationship.

An insider reportedly said: “Katie and Carl have decided to split up.

“It’s been a difficult couple of months and their ongoing court cases have just added even more stress to the situation.

Meanwhile, Katie has since been spotted without her engagement ring on Instagram.

But is it over for good? We guess only time will tell…