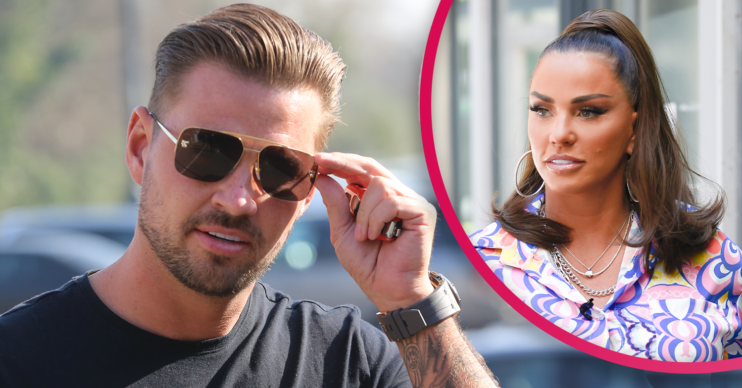 It left some fans 'confusd'

Hot off the plane from Thailand, the couple were seen heading to Colchester Magistrates’ Court after an incident in Little Canfield back in August.

The court appearance had been postponed due to his holiday.

After pleading not guilty on charges of threatening, abusive or insulting behaviour, Carl headed home to his four-legged friend.

Cuddling up with Sid on the sofa, he shared a selfie of himself with the pooch.

But it was his caption that raised some eyebrows.

After spending the day in court with Katie, Carl posted “This is what loyalty looks like.”

Some admitted they were “confused”.

One said: “Confused! You said truth will come out yet you’ve been charged.”

Others appeared to suggest Carl should ditch Katie and spend all his time with Sid.

Read more: Kieran Hayler hopes justice ‘will be served’ and has told kids ‘mum might go to jail’

“Dogs are more loyal than women. Sid is lovely,” they commented.

Carl walk away from her drama, also she has too much baggage, get a young single woman for yourself.

“Trust your heart and your gut always,” warned another.

Another advised: “Carl walk away from her drama, also she has too much baggage, get a young single woman for yourself….. give yoourself some self love for a change.”

“Very cryptic,” said another. “Hope you are putting yourself first and getting rid of the dead weight.”

Why were Carl Woods and Katie Price in court?

Carl was in court to answer charges of threatening, abusive or insulting behaviour.

He was charged under section 4 of the Public Order Act with using threatening, abusive or insulting words or behaviour last month.

Katie watched on as Carl pleaded not guilty to the charges.

Of course, Katie is also facing a prison term after she was charged with harassment after allegedly sending a message to ex-husband Kieran Hayler’s fiancée Michelle Penticost.

He could get up to six months in jail, while she could be handed a five-year sentence.