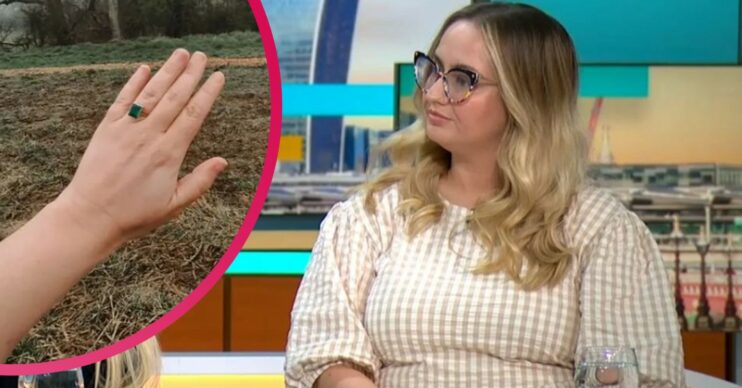 Followers can't get enough of her ring

Katie Price may have reportedly split from her fiancé – but it appears her sister Sophie is now engaged.

The 32-year-old told followers she said ‘yes’ as she showed off a dazzling emerald ring on her engagement finger.

The post came just hours after a tabloid report claiming Katie‘s engagement to Carl Woods is off and the couple have broken up.

Sophie, 32, was congratulated by fans and social media followers as she revealed her engagement to partner Harry Brooks.

Read more: Katie Price and Carl Woods ‘break up and call off engagement’

Well I didn’t expect that.

She captioned the image: “Well I didn’t expect that round the fire pit last night… I said YES! #imengaged #yes #summerwedding.”

ED! has approached a representative for Sophie for comment.

Katie was among those to offer their love and congratulations to Sophie online.

The former glamour model expressed her delight in the comments section with a string of eleven hearts emojis.

Furthermore, Katie’s ex Kris Boyson also added his own words to the post.

However, they weren’t as sentimental as those from other well wishers.

“You’re stuck with that ballbag @harrybrooks88 for the rest of your life now? You’re mental girl!” comments from his account read.

Elsewhere, many fans made mention of how much they admired Sophie’s ring.

“Wow what a stunning ring! Congratulations to you both,” contributed another.

And a third added: “That ring is so good.”