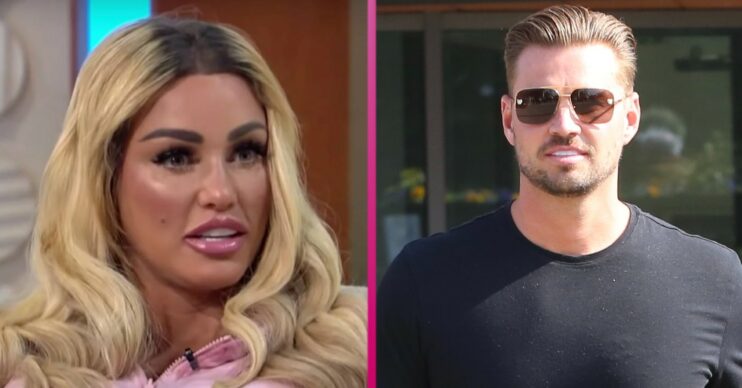 Katie Price and Carl Woods ‘break up and call off engagement’

Is it all over?

Katie Price and Carl Woods have split up and called off their engagement, a tabloid report claims.

It was the seventh time the 43-year-old mum-of-five has been engaged.

Reports suggested they were due to wed in 2022 and there was also speculation they may have wanted a baby together.

It was reported yesterday (Saturday March 26) that Katie had been spotted without her engagement ring on Instagram.

There have also been recent claims that Carl ‘deleted images of Katie’ from his Insta account.

Furthermore, a few days ago, Carl raised eyebrows with a ‘cryptic’ post about loyalty featuring his pet pooch Sid that ‘confused’ some fans.

The post came on a day that saw Carl plead not guilty on charges of threatening, abusive or insulting behaviour in court. He was granted unconditional bail.

Now The Sun claims it is all over for the couple.

But pals close to the situation are reportedly open-minded about whether their relationship is done for good.

‘It’s been a difficult couple of months’

According to the tabloid, several sources close to Katie and Carl have said they’ve called time on their relationship.

An insider reportedly said: “Katie and Carl have decided to split up.

“It’s been a difficult couple of months and their ongoing court cases have just added even more stress to the situation.

They are both very sad about it.

ED! has approached representatives for Katie Price and Carl Woods for comment.

Since the news outlet published their story online, Katie has been active on her Instagram Stories account.

As well as plugs for products, she took to social media to complain about having a bad day.

She told followers, sarcastically: “So what a great day I have had spending my whole day in the car so far on a Saturday when the sun is out shining and I am still here.”