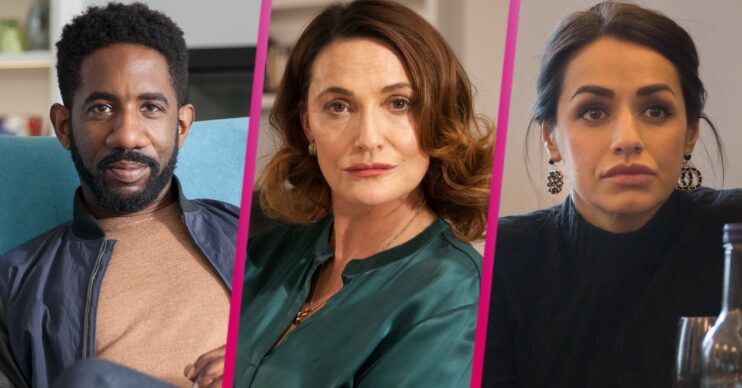 McDonald & Dodds season 3 episode 3 cast: Who stars in The War of the Rose?

It's another brilliant line-up of guest stars this week!

McDonald & Dodds season 3 continues with The War of the Rose this week, and has another fabulous cast – so who stars in series 3 episode 3?

The two hour film sees DCI Lauren McDonald and DS Dodds called to investigate what appears to be a tragic accident.

But the routine procedure goes horribly wrong and she dies on the operating table.

So who plays Rose in the cast of the McDonald & Dodds episode War of the Rose?

And who else stars in series 3, episode 3?

Who plays Rose Boleyn in the cast of McDonald & Dodds The War of the Rose?

Actress Rosie Day stars as Rose Boleyn in the cast of McDonald & Dodds episode The War of the Rose.

Her character is a young social media influencer, who checks in to have a nose job, but dies on the operating table.

Cambridge-born Rosie, 27, has been acting since she was a child.

Her first TV role was in 1999 when she appeared in the series Hope and Glory as Emma.

She went on to star in Black Books, Family Affairs, Trust, Harley Street and Homefront among others.

She won four Best Actress awards for the role, and has gone on to star in many more films including The Convent, Peripheral, and Butterfly Kisses.

Before that, though, Hollyoaks fans would have known her best for portraying Anita Roy in the C4 soap.

She went on to star in Crime Stories, Doctors, Porridge and Cold Feet.

She played PC Tegan Thompson in the police comedy.

Saira will be recognisable to Coronation Street fans, too – and not just because of her striking resemblance to former Corrie star Michelle Keegan.

The actress portrayed Weatherfield Gazette journalist Naila Badal in the ITV soap in seven episodes over the course of six years – from 2013 to 2019.

Actor Nitin Ganatra, 54, guest stars as Dan in the cast of McDonald & Dodds The War of the Rose.

Of course, EastEnders fans will know him best for portraying Masood Ahmed in the BBC soap from 2007 to 2019.

Nitin has been on our TV screens since 1990, when he starred as a ghost in the Alan Rickman film Truly Madly Deeply.

He went on to portray Ali Khan in Extremely Dangerous, Tariq Shah in The Jury, Jimmy in Rescue Me and Sunil in Being April.

Nitin starred as Prince Pondicherry in Tim Burton’s Charlie and the Chocolate Factory.

Actor Nicholas Goh portrays Jian Yang in the cast of McDonald & Dodds series 3, episode 3 The War of the Rose.

The jobbing actor has recently appeared in The Essex Serpent as Doctor Zhao, Professor Rhineheart in Queens of Mystery, and Jay in the brilliant Unforgotten.

Other roles include Devils, Into the Badlands, and Mars, where he portrayed Commander Chen.

The actress is a star of both stage and screen.

She most recently played Rowan in the cast of tense thriller The Holiday on C5.

Siobhan has also had roles in The Syndicate, Sherlock, and Torchwood to name a few.

Film roles have included The Original Wendy Darling in Lost Girls, Kate in Brakes, and Tracey in Redemption.

Fifty-four-year-old actress Sarah Parish joins the cast as Mariel Flynn in McDonald & Dodds episode The War of the Rose.

It’s a shame she missed her real life husband by one series!

Sarah is married to James Murray, who played Chief Supt John Houseman in series 1 and 2 of McDonald and Dodds (before he was replaced by Claire Skinner’s DCI Mary Ormond).

TV fans will know her well, from a variety of popular roles.

She recently played Lorraine in the cast of Netflix thriller Stay Close.

Bancroft fans will know Sarah Parish from her role as Elizabeth Bancroft in the ITV1 series.

She’s probably most famous for playing Natalie Holden in Blackpool, Allie Henshall in Cutting It, and Dr Katie Roden in Mistresses.

Other notable roles include Melissa in The Cock Fields, Jenny Bremner in Monroe, Cath Atwood in Broadchurch, and Anna Rampton in W1A.

Viewers of Industry might well wince with horror at her role in the series, which saw her sexually assault a younger female.

Actor and comedian Rhashan Stone, 52, stars as Algernon ‘Al’ Ford in the cast of McDonald & Dodds The War of the Rose.

He recently played Fraser in the cast of Hollington Drive on ITV1.

He’s been on our TV screens for nearly three decades.

Rhashan first appeared in the TV series Desmond’s as Bernie in 1993.

He went on to appear as a jobbing actor in the likes of Goodnight Sweetheart, Holby City and The Detectives.

He starred as Paul Sharpe in The Bill, Tom Gorman in Bodies, Dev in Mutual Friends, and has played various roles in Horrible Histories between 2003 and 2011.

Most recently, he portrayed Major Oliver Sinclair in Strike Back, Mal Milligan in The Smoke, and Obi in Ballot Monkeys.

Viewers may recognise him from his recent role as Nathan in Finding Alice.

Nathan is a coroner who becomes a tower of strength for bereaved widow Alice (played by Keeley Hawes) – and perhaps eventually more?

He’s also a singer and musician in a wide range of styles, including jazz, soul and gospel.

He is a classically trained singer, musician and composer, and also works occasionally as a playwright.

Actress Emily Joyce stars as Diane in the cast of McDonald & Dodds episode The War of the Rose.

Emily, 53, is perhaps best known for playing the role of Janet Dawkins in the BBC comedy series My Hero.

She played the character of Janet Dawkins, opposite superhero Thermoman, originally played by Ardal O’Hanlon and followed by James Dreyfus.

She’s also known for playing Sarah in Mutual Friends, Emma Rice in The Glass, and Laura in Grafters.

Who else stars in the cast of McDonald & Dodds The War of the Rose?

Are you enjoying McDonald & Dodds series 3 so far? Leave us a comment on our Facebook page @EntertainmentDailyFix.