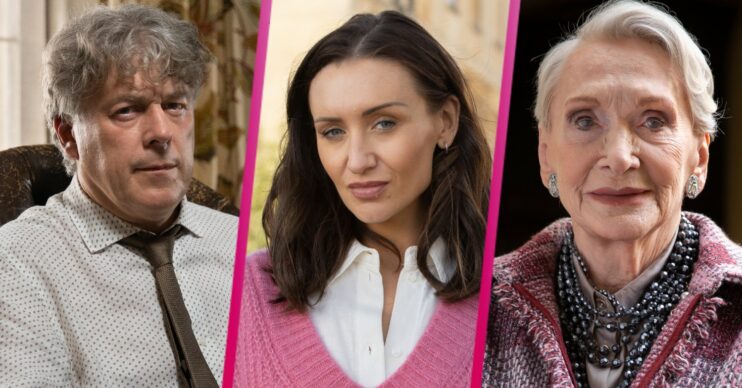 McDonald & Dodds is known for its revolving door of famous faces, and series 3 is no exception – so who is in the cast of episode 1?

And series 3 has another glittering cast.

Here’s everything you need to know about McDonald & Dodds series 3 episode 1 cast.

The feature-length film, called Belvedere, follows the investigation after a young woman dies in a busy park in broad daylight.

As McDonald & Dodds attempt to untangle the mysterious circumstances of her death, they are puzzled as the victim appears to be smiling.

Evidence leads to Professor George Gillan, a linguistic anthropologist who lives in a rambling mansion with his eccentric mother, whose 100th birthday is days away.

Dodds is sure that the house has something to do with the murder, but in uncovering its history, Dodds also unearths secrets in his own past.

Previously, Catherine had also played Abi Peterson in Emmerdale in 2010.

Since leaving Corrie, Catherine has portrayed Sara in 15 Days, Karen in Scarborough, and Kate Tuckman in the ill-fated Viewpoint.

She also played herself in the Amanda Holden comedy The Holden Girls: Mandy & Myrtle.

It’s his first TV acting role for a few years, but he’s well known to viewers.

As well as regular appearances on the panel of QI, comedian and actor Alan is a team captain on the fun quiz Guessable.

He’s also portrayed Simon Treat in One For the Road, Russell Boyd in A Many Splintered Thing, and Robert Gossage in Bob & Rose.

In 2010, Alan starred as Roland White in Whites.

Most recently, he’s played Dan Proctor in Flack, Porter in The Midnight Gang TV movie, Jonny Cork in The Frankie Drake Mysteries, and Donald Roberts in The Bromley Boys.

From 2016 to 2018, he starred in the Jo Brand sitcom Damned, set in the social services department of a local authority.

She is perhaps best known for playing forensic pathologist Frankie Wharton in the BBC1 drama series Waking the Dead.

Holly played the role in the popular TV series opposite Trevor Eve from 2000 t0 2005.

We’ve got to admit, we still miss the series and would love to see it come back!

Holly previously starred in Soldier Soldier as Sgt Nancy Thorpe, and Carla in Dressing for Breakfast.

She also portrayed Jo in the 1997 film Fever Pitch alongside Colin Firth.

More recently, Holly has played Jeanette in the drama Four Lives, Laura Merriman in Casualty, and Francoise in A Discovery of Witches.

Agnes Gillian is played by Dame Siân Phillips in the cast of McDonald & Dodds series 3 episode 1.

The veteran Welsh actress, 89, had been on our TV screens ever since 1958!

Her first ever TV role was as Alice Blackwell in the series Television Playwright.

Since then, she has made a name for herself in film, theatre and TV.

Her most notable film roles include Reverend Mother Gaius Helen Mohiam in Dune, Livia in I, Claudius, and Cassiopeia in Clash of the Titans.

TV viewers will know her as Miss Matilda Crawley in Vanity Fair, Mrs. Driver in The Borrowers, and Older Lady Emily in Aristocrats.

She’s been cast in the upcoming second series of Good Omens.

Speaking about her role in the new series, Claire Skinner, said: “I’m a huge fan of McDonald & Dodds so I’m delighted to be joining the cast as Chief Superintendent Ormond.

“Ormond is a quietly intimidating character so she’ll be keeping McDonald & Dodds on their toes throughout this new series.”

The arrival of new boss causes a number of complications for both McDonald and Dodds.

You’ll also recognise her from a multitude of popular TV series including The Pale Horse, Next of Kin, Power Monkeys and Critical.

Although, like Claire Skinner, he’s not a guest star, but more of a permanent fixture in series 3.

Charlie, who used to go by the name Charlie Jones, played Ben Mitchell in EastEnders between 2006 and 2010.

But he looks virtually unrecognisable these days!

In McDonald & Dodds, Charlie sports a beard – would you have recognised him?

Actor Charlie starred as Danny Hickson in the first series of Noughts + Crosses.

Who else stars in McDonald & Dodds series 3 episode 1?

Sanditon viewers will know her as Clara Brereton.

Are you impressed with the guest cast in McDonald & Dodds series 3 episode 1? Leave us a comment on our Facebook page @EntertainmentDailyFix.