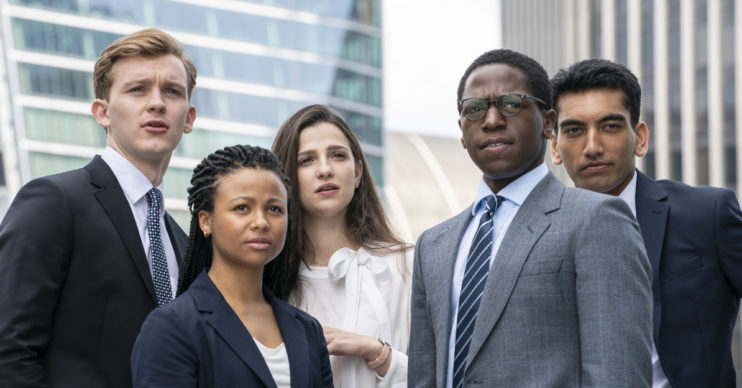 Sarah Parish even appeared as a sapphic sex pest

With no drama on ITV and BBC One tonight (November 10), viewers tuned into new series Industry on BBC2 for a fix.

And it sure got people’s attention, with sexual assault, reckless shagging, cavalier drug-snorting and a death all crammed into the first episode.

Not so surprising when you consider Lena Dunham, creator of US shock-drama Girls, which was naked and raw in both the literal and figurative sense, directed the opener.

It’s reminiscent of This Life, the cult BBC2 series from the 90s, with the legal backdrop here replaced by financial services (different profession, same old privileged and pompous personalities).

The eight-part drama opened with five early 20-somethings beginning their careers at Pierpoint, a prominent bank in the City, to be immediately warned that they would all face RIF day in six months’ time.

RIF stands for ‘reduction in force’ – in other words, most of them would lose their jobs. The pressure was on to work hard and earn a permanent position.

And, being young, emotionally dumb and full of… vim, this bunch of recruits were out to play hard too.

The central roles are all played fantastically by relative newcomers, not that their characters are particularly likeable (yet).

Industry: what happened in episode one?

American Harper displayed incredible potential, but is clearly hiding something about her education credentials.

Gus attended Eton and possesses the sort of self-entitlement reserved for that flavour of upper class.

His university friend Robert is particularly into extracurricular activities that left him naked or gurning, sometimes both.

Yasmin wasn’t being taken seriously by her team and is little more than the coffee and salad girl.

And there was Hari, a former state-school pupil with something to prove. And ‘was’ because he didn’t even make it to the closing credits.

Working round the clock and popping ‘performance’ pills to facilitate that, poor Hari popped his clogs sitting on the loo at the office he barely left. (If it was good enough for Elvis…) 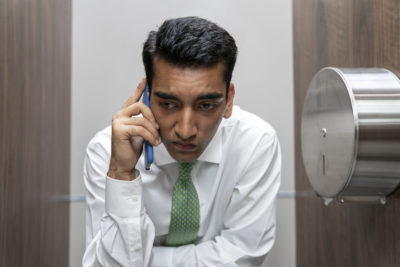 But anyway, you’re probably just here for the stuff about the sex and nudity.

First off, Harper whipped of her bra and indulged in some mutual self-pleasure in a video call with someone in the States who has IT’S COMPLICATED tattooed on his penis (possibly).

British TV acting aristocracy Sarah Parish then shocked as businesswoman Nicole who went all Weinstein in the back of a car with Harper.

Harper knew crotch grabbing by a client was ‘off’ but chose to put it to one side for the sake of a deal.

All pretty outrageous for a Tuesday night on BBC2, and UTTERLY addictive. Its only major fault is not being available to stream all episodes.

What did Industry viewers say?

Did you tune in? Will you be catching up now?! Let us know your Industry reviews on our Facebook page
@EntertainmentDailyFix.