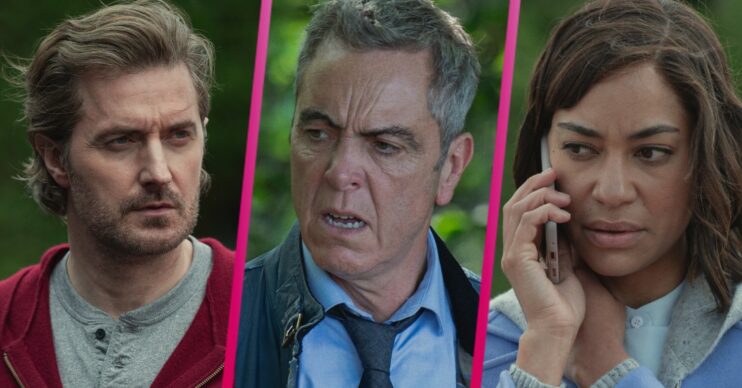 It's got a cracking cast full of TV's best actors!

Stay Close on Netflix is the latest Harlan Coben thriller to be adapted by the streaming service – and the cast makes it even hotter than usual.

The eight-part series promises to be THE next big rollercoaster ride to enjoy in the New Year.

So who is in the cast of Stay Close, which streams from New Year’s Eve 2021?

Here’s everything you need to know about the exceptional line-up of actors.

Stay Close is a tense thriller that questions how well you can ever REALLY know someone.

James Nesbitt stars in the new thriller, fresh from his roles in crime dramas Bloodlands and Line of Duty.

He plays Michael Broome, a detective who’s unable to let go of a missing person’s cold case – that of a local husband and father who disappeared 17 years ago.

His first significant film role came when he appeared as pig farmer ‘Pig’ Finn in Waking Ned in 1998.

Megan is a working mother of three who has run away from a dark and dangerous past.

But is she really happy with her new identity and how her life has turned out?

TV viewers will know London-born actress Cush Jumbo for her role as attorney Lucca Quinn in the CBS legal drama series The Good Wife and the spin-off series The Good Fight.

She also starred as DC Bethany Whelan in the ITV crime drama series Vera, and as Lois Habiba in the third series of Doctor Who spin-off Torchwood in 2009.

Cush, 36, recently appeared in the BritBox drama The Beast Must Die, and C4’s Deadwater Fell – so she’s well used to appearing in tense thrillers!

Ray was once a promising war-time photographer, who’s now stuck in a dead-end job pandering to celebrity-obsessed rich kids.

He’s never been the same since the day his fiancée, Cassie, walked out of his life.

He suffers with PTSD which can cause blackouts, and makes his memory unreliable.

When men, who all have a connection to him, start disappearing, he begins to wonder whether he has anything to do with it…

TV viewers probably know Richard best for his role as Guy of Gisborne in Robin Hood, and Lucas North in Spooks.

Although he came to fame playing John Thornton in North & South.

Other notable TV roles include John Porter in Strike Back, Francis Dolarhyde in Hannibal, and Daniel Miller in Berlin Station.

Film roles include John Proctor in The Crucible, Thorin in The Hobbit franchise, and Heinz Kruger in Captain America: The First Avenger.

Lorraine is a past-flame of Detective Broome, and old friend of Megan.

She’s the long-serving bar manager at Vipers nightclub – where one dancer went missing 17 years ago.

Unable to let go of the past, Lorraine tries to get answers and she arrives back in Megan’s life to deliver some shocking news…

Bancroft fans will know 53-year-old Sarah Parish from her role as Elizabeth Bancroft in the ITV1 series.

She’s probably most famous for playing Natalie Holden in Blackpool, Allie Henshall in Cutting It, and Dr. Katie Roden in Mistresses.

Other notable roles include Jenny Bremner in Monroe, Cath Atwood in Broadchurch, and Anna Rampton in W1A.

Detective Erin Cartwright used to be married to Mike Broome, but they wanted different things and divorced.

She is now happily remarried with a child, and she and Broome make a good professional team.

The partners are tasked with investigating the disappearance of a young man, which Broome is convinced is linked to a cold case he’s never forgotten.

The actor plays Harry Sutton, a solicitor in the sleazy end of town who helps those who have nowhere else to turn.

Harry is also a functioning drug addict, who somehow manages to maintain a strong work ethic in spite of his addiction, passionately dedicated to helping the underdog.

Seventeen years ago, a client called Cassie disappeared and he feared that she was killed.

Now she turns up at his office, alive and well and asking for his help, but Harry’s involvement will ultimately put him in great danger.

Eddie, 59, is best known for their stand-up comedy, but is also famed for their role in The Riches and films including Ocean’s Twelve and Ocean’s Thirteen.

Eddie has also played Dr. Abel Gideon in Hannibal, and Peter Solomon in The Lost Symbol.

Stay Close episodes – who else stars in new Netflix thriller?

In her previous life, Simona was an army sergeant, who knew war photographer Ray from a tour of Iraq.

Now she is eight months pregnant and her partner has gone missing a week before their wedding.

Unable to rest, Simona resorts to desperate actions in her search for answers, but how well does she know the father of her child?