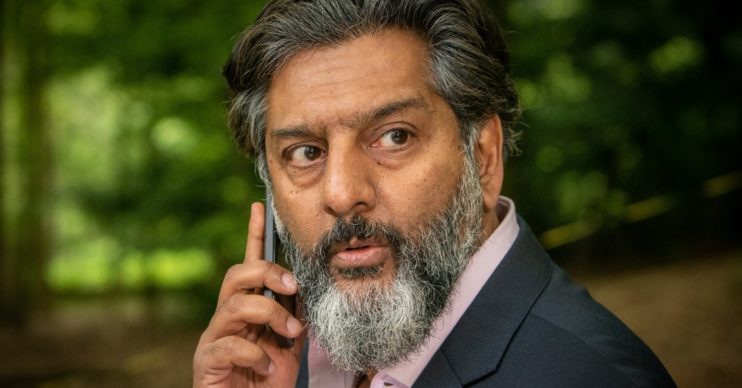 Who plays Ned Skye in Midsomer Murders? How did Nitin Ganatra leave EastEnders?

DCI John Barnaby and DS Jamie Winter return to ITV1 in With Baited Breath on Sunday (March 28 2021) – but who plays Ned Skye in Midsomer Murders?

So how did he leave? And who does he portray in Midsomer Murders?

Who plays Ned in Midsomer Murders?

Ned lives in the picturesque village of Solomon Gorge, where Barnaby and Winter arrive to investigate a violent attack.

Nitin’s character ruffles feathers when he organises an extreme obstacle course ‘Psycho Mud Run’ at the same time as an important fishing competition.

Ned redirects the course so that it goes through the lake, which further incenses the fishing community.

No one will be able to catch anything once hundreds of lycra clad fitness fanatics start sploshing through the shallows!

When Barnaby meets Ned, he is surprised to find him with a friend from his past, former DCI Artie Blythe.

But all that is fish food when a man goes missing and is later found electrocuted to death!

Who plays Ned in Midsomer Murders? What has Nitin been in before?

Nitin is an actor, probably best known for playing Masood Ahmed in EastEnders.

He’s been on our TV screens since 1990, when he starred as a ghost in the Alan Rickman film Truly Madly Deeply.

He went on to portray Ali Khan in Extremely Dangerous, Tariq Shah in The Jury, Jimmy in Rescue Me and Sunil in Being April.

Nitin starred as Prince Pondicherry in Tim Burton’s Charlie and the Chocolate Factory.

Who did Nitin play in EastEnders and how did he leave?

His turbulent marriage to Zainab Masood (his real life friend Nina Wadia) served as a key storyline for the character throughout his time in Walford.

Early plot lines for the character included bankruptcy and struggling to accept his son Syed’s sexuality.

In 2011, the character had an affair with Jane Beale, which led to end of his marriage.

He later began a relationship with Carol Jackson, but eventually found love with Kathy Beale.

The character left Walford at the beginning of 2019 to emigrate to Australia, leaving behind girlfriend Kathy.

However, Nitin has teased a possible return in the future…

Is Nitin Ganatra married? Who is he married to and does he have kids?

Nitin has been married to Meera Thakrar since July 17 2004.

He became a father for the first time at the age of 38 when his wife Meera gave birth to their son Sameer Vivek Ganatra in February 2006.

They now have two children and live together in north London.

How old is Nitin Ganatra?

Nitin worked as an optometrist, gaining a degree in optometry from Aston University in 2000.

He later studied Drama, Film and Television at Bristol University.

Who plays Ned in Midsomer Murders? Where is Nitin from?

Nitin was born in Kenya as Nitin Chandra Ganatra.

He moved with his family from Kenya to Coventry in 1971.

Midsomer Murders: With Baited Breath airs on ITV1 at 8pm on Sunday March 28 2021.

Are you enjoying the current series of Midsomer Murders? Leave us a comment on our Facebook page @EntertainmentDailyFix.