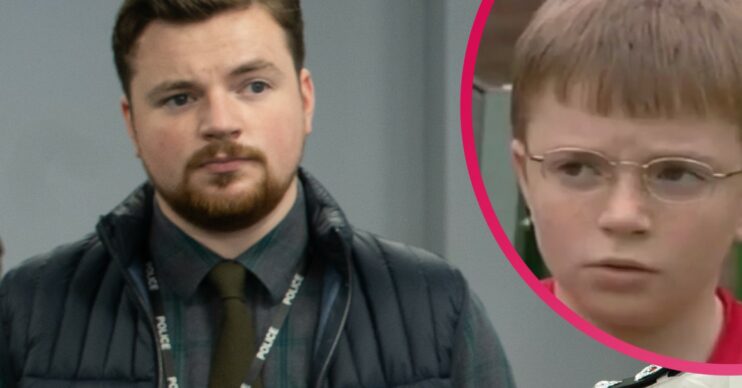 EastEnders fans might get a shock this week when they watch McDonald & Dodds on ITV1 and spot Ben Mitchell!

Here’s everything you need to know about Charlie’s new role, and when he played Ben Mitchell in EastEnders.

Like Claire Skinner, he’s joining the cast as a permanent fixture in series 3.

Charlie, who used to go by the name of Charlie Jones, played Ben Mitchell in EastEnders.

But he looks totally different in the ITV1 series.

In McDonald & Dodds, Charlie sports a beard and is obviously much older.

Charlie Chamber played Ben Mitchell in EastEnders between 2006 and 2010.

Some soap fans consider Charlie to be the original Ben Mitchell.

While he wasn’t technically the original Ben, he’s one of the longest-serving actors in the role – and arguably one of the most memorable.

Charlie took on the role of the 10-year-old in 2006, when the character returned to Albert Square following the ‘death’ of mum Kathy Beale (who later turned out to be alive and kicking).

Young Charlie played Ben for four years during his childhood, and was at the centre of some huge storylines including domestic abuse.

His most memorable storyline was the physical and mental abuse he suffered at the hands of his dad Phil’s girlfriend Stella Crawford.

Why did he leave EastEnders?

The BBC recast the role of Ben Mitchell after Charlie Chambers left in 2010.

Viewers had witnessed Ben tormenting his little sister Louise in the same way Stella had abused him.

When Phil found out, Ben told him he was reacting badly to being bullied by Jordan Johnson.

Phil advised Ben to fight back and Ben took him at his word, whacking poor Jordan with a spanner and fracturing his skull.

Ben was sentenced to eight months in a young offenders’ prison.

This was when the actor was replaced.

Joshua Pascoe took over the role in 2010 for two years.

Three other actors have played the role since then, including the most recent incarnation Max Bowden.

What other roles has McDonald & Dodds star Charlie Chambers played since Ben Mitchell?

It was his first major TV role since leaving the soap.

He meting a grisly death after just two episodes of the drama.

According to Charlie’s InterTalent page, he graduated from ALRA drama school in 2018.

As well as playing Ben, he played Shaun in Where the Mangrove Grows at Theatre 503.

His agent Brooke Kinsella is also a former EastEnders star, having played Kelly from 2001 to 2004.

His appearance as DC Samuel Goldie in McDonald & Dodds is his next big role to date.

Charlie Chambers was just a pup when he appeared in EastEnders.

McDonald & Dodds on ITV1: How many actors have played Ben Mitchell in EastEnders?

Ben Mitchell in EastEnders has been played by six different actors since his first appearance in the show back in 1996.

Now Ben is played by Max Bowden, who joined EastEnders in 2019.

Ben was previously portrayed by Matthew Silver from 1996 to 1998.

McDonald & Dodds airs on Sundays at 8pm on ITV1.

Would you have recognised the actor who played Ben Mitchell in McDonald & Dodds? Leave us a comment on our Facebook page @EntertainmentDailyFix.