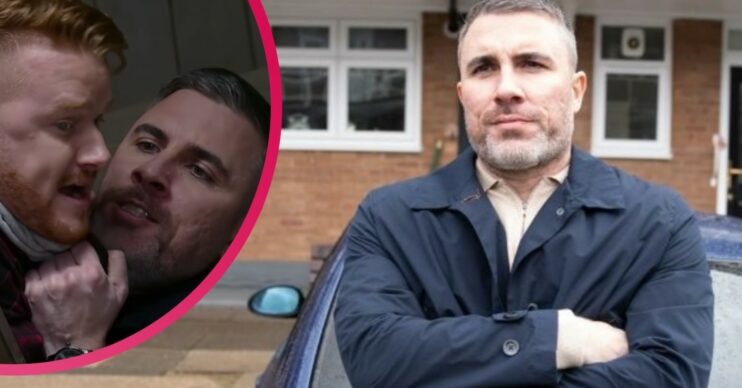 Coronation Street: Why and how did Gary kill Rick Neelan and who knows the truth?

As soap secrets go, this one's been kept quiet for a while!

Rick Neelan in Coronation Street was the loan shark with a vicious side who tormented several Weatherfield residents over the years.

He was Kelly Neelan‘s dad, and Laura Neelan’s husband – though we can’t say they were exactly couple goals!

And evil Rick is dead!

But who killed him and why?

Poor Joe was getting ready to tie the knot with fiancée Gail, and couldn’t pay back his debt in full.

And things got worse from there on, with Rick threatening him and his family.

He even set fire to a newspaper and posted it through the door of the flat where Joe’s daughter Tina McIntyre lived.

In desperation, Joe decided to fake his own death. But it all went wrong and he actually popped his clogs.

What happened between Rick and Terry Duckworth?

Rick reared his head again a couple of years later, when Terry Duckworth had an idea to open a sleazy lap-dancing club.

Terry had borrowed some wonga from Rick and once more, things took a nasty turn.

By now, Tina had a new boyfriend – Terry’s son, Tommy. She was horrified to find out who Terry was involved with.

When Rick forced Terry to choose between Tommy and his debt being written off, Terry chose money. Ouch.

His debt passed to Tommy and the poor lad was forced to take a job smuggling drugs for him.

Tina, though, wasn’t going down without a fight. She nicked the drugs, and tried to arrange a meeting with Rick.

But Rick kidnapped Rita – on the day of her wedding to Dennis Tanner – in an attempt to get Tina to give in. There was a bit of a confrontation and in the end, Rick was arrested.

Why and how did Gary Windass kill Rick Neelan?

When he was released from prison in 2019, Rick showed up on the cobbles once more wanting Gary to pay back a debt.

But Rick had met his match in Mr Windass. After several violent confrontations, a kidnap attempt, threats to Gary’s family, and all sorts of horrible goings on, Rick tried to kill Gary.

He managed to get away, but the next time they met – in the woods –  Gary discovered a grave Rick had dug for him. Sinister!

There was a vicious fight, and Gary killed Rick and buried him in the grave.

Later, he moved the body to where the new Weatherfield County training grounds are.

He told her that her father was a loan shark and had gone on the run from police.

She left but later returned when she started Weatherfield High.

Kelly didn’t have the best home life and was abandoned by her mother Laura numerous times.

After bouncing between foster homes, Kelly was fostered by Imran and Toyah.

Kelly ended up in prison when she was charged with Seb Franklin’s murder.

But it was later proved although Kelly was at Nina and Seb’s attack, it was Corey Brent who murdered him.

After prison, Kelly ended up homeless but eventually went to live with Gary and Maria, still unaware of Gary’s crimes.

Recently Laura returned and revealed she is dying of cancer.

Gary and Maria agreed she could move in so they could help Kelly look after her terminally ill mum.

But Laura hired a PI to look for Rick so she could get his money for Kelly.

She was shocked when the PI told her police believe Rick is dead and Gary killed him.

She confronted Gary and he admitted the truth.

Although she said she was going to call the police on Gary, she ended up telling police she killed Rick and was arrested.

Has Rick’s body been found?

This week, Rick’s body will be found at the new Weatherfield County training grounds.

Who knows about Rick’s murder?

Will Kelly ever find out who really killed her dad?