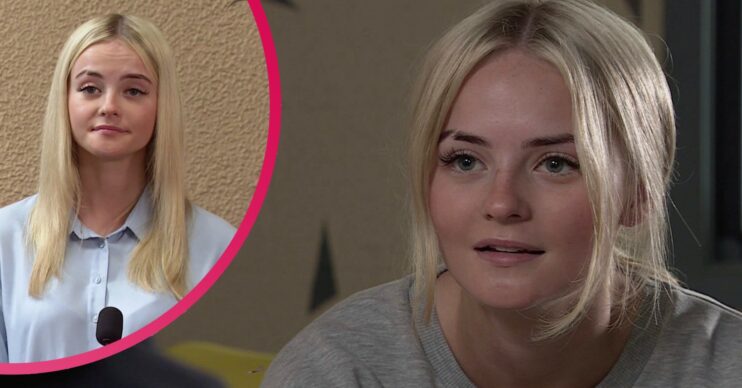 Kelly Neelan in Coronation Street: Who is she? Who’s her dad? And will she get released from jail?

She's stuck behind bars for now but is Corey going to pay for his crimes?

Kelly Neelan in Coronation Street is the troubled teen daughter of loan shark Rick Neelan and his wife, Laura.

Kelly’s recently been released from prison after being given a life sentence for killing Seb Franklin.

But though she was involved in the attack that lead to Seb’s death, it wasn’t Kelly who struck the fatal blow – that was wannabe football star Corey Brent.

After Corey’s re-arrest, Kelly’s out, but facing the Street residents isn’t easy…

Kelly Neelan in Coronation Street is played by Millie Gibson.

Millie was in television shows including Jamie Johnson and Butterfly, before she landed the role of Kelly.

Her scarred eyebrow has attracted comments from viewers, who wondered whether it was part of Kelly’s character.

But Millie has revealed she fell on the stairs as a child and hit her head on the bannister – leaving the scar.

And Millie has also admitted that reading the scripts for Kelly and Corey’s attack on Seb and Nina in Corrie left her sobbing.

Where is Kelly’s dad?

Kelly’s dad Rick Neelan was a nasty piece of work. He was a loan shark and tormented Joe McIntyre when he first came to the Street.

Later he caused problems for Terry Duckworth and his son, Tommy.

And when he reappeared in Weatherfield in 2019, after serving time behind bars, it was Gary Windass who was in the firing line.

Their feud left Rick dead and Gary going to some pretty great lengths to cover up his crime.

What’s next for Kelly Neelan in Coronation Street?

Kelly was released from jail earlier this week, but hasn’t found the welcome particularly warm.

Left with nowhere to live after Toyah and Imran began fostering another child, Kelly was given accommodation but social services, but is about to realise it’s unsafe to live there.

After befriending another resident, she’s dragged into his criminal ways and is determined not to be sent back to prison.

Finding herself on the streets next week, she even contemplates turning to prostitution.

When she charges her phone in a hotel reception and is confronted by staff, another guest, Alan, comes to Kelly’s rescue. He tells Kelly she can come up to his room any time she likes.

And later that night, when she finds her stuff stolen and herself totally out of options, she knocks on Alan’s door. Will she do the unthinkable to find a warm place to sleep for the night?

Despite Aadi offering her a place to stay at his, Kelly knows she’s not wanted and ends up back on the streets.

It’s fellow homeless person Stu who proves to be her knight-in-shining armour when he finds her hunting for food in the bins. Stu shows her where to get a warm meal, but is his help enough? Can Kelly really survive on the streets?