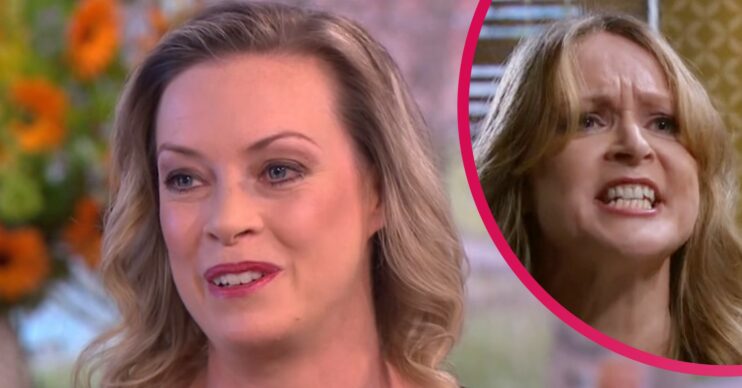 Emmerdale: Sharon Marshall impresses fans who all have the same plea

The This Morning soap expert writes for Emmerdale

The Wednesday night visit to the Dales (April 20) featured a mix of high emotions from Rhona and Mary, and comedy from Paddy and Vanessa, and fans felt it was the “perfect mix”.

Following high praise for the episode, they are desperate for Sharon to write more of the soap.

“Sharon Marshall you are one of the best scriptwriters in the world,” said one viewer. “Such powerful and epic performances by everyone involved.”

Another agreed: “Such a heartwarming chat between Rhona and Mary. Congratulations to Sharon Marshall on the writing for this scene.”

And one more said: “Petition to get Sharon Marshall to write all Emmerdale episodes. They always have the perfect mix of humour, angst, great conversations between characters, and they flow so naturally as well. 10/10.”

What happened on Emmerdale last night?

The scenes fans particularly referred to featured Rhona and Mary, who had had a terrible row the previous evening.

After Mary suggested Rhona should think about breaking up with Marlon, Rhona kicked her mum out.

But the pair reconciled and in very moving scenes in the Woolpack Rhona confessed she had thought about whether she was strong enough to cope if Marlon didn’t recover following his stroke.

Rhona heartbreakingly confessed: “I miss my life,” and that she felt like a horrible person.

Mary insisted she wasn’t having bad thoughts, it was just that “a bad thing happened”.

Meanwhile, at the other end of the scale, there was some light relief courtesy of Paddy and Vanessa.

Poor Vanessa had been pooed on by a pig and tried to hide from her new love interest Suzy. But she was caught covered in muck and, surprisingly, Suzy didn’t care a bit and still asked her out.

Viewers were treated to Vanessa acting like an anxious teenager about to go on her first date, which ended in complete disaster when she got fake tan on her dress, broke her phone by spilling wine on it and having to stay home because Johnny threw up.

As Paddy tried to help, the pair became quite the comedy double act and fans lapped it up.