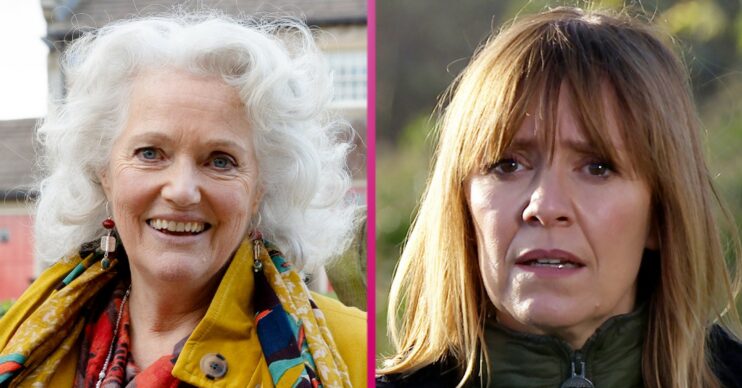 Who plays Rhona’s mum Mary Goskirk in Emmerdale? Where have you seen Louise Jameson before?

Mary Goskirk arrived in Emmerdale tonight (Monday, March 7) but who is she and who plays her?

Who is Mary Goskirk in Emmerdale?

Mary is the mother of Rhona Goskirk and grandmother to Leo Goskirk.

Who plays Mary in Emmerdale?

Mary is 70 years old and is from Essex.

The actress was married to Martin Bedford from 1990 until 1997 and she has two children.

What has Louise Jameson been in?

Louise has had numerous television roles.

From 1998 until 2000 she famously played Rosa Di Marco in BBC soap EastEnders and in 2011 she played Eleanor Glasson in Doc Martin.

This also isn’t the first time Louise has been in Emmerdale.

In 1973 Louise played Sharon Crossthwaite in the soap. Sharon was murdered by Jim Latimer after he followed her home and kidnapped her.

He buried her body in the local lime kiln. No one knew what happened to her and presumed she had gone missing.

Sharon’s body was later discovered and Jim confessed to her murder.

Sharon was the show’s first ever murder victim.

Louise was asked if she knew much about Rhona before she started on the show and she revealed she has a connection to her co-star Zoe Henry, who plays Rhona.

Speaking to Entertainment Daily and other media she said: “No, when the availability check came through I started to do a bit of stalking online and learnt that Rhona, Zoe Henry, we come from the exact same place in Essex.

“We have a lot in common with each other which is a wonderful coincidence so we can really identify as mother an daughter.

“We’re both from Essex and we both played in the same parks, walked in the same forests, we’ve had that conversation, it’s been lovely.

“I think she’s fantastic on and off screen, I feel slightly bless to be paired up with her really. Emmerdale has a buddy scheme and she’s even my buddy, I feel I’ve struck gold.”

When asked what she knows about Mary so far, Louise said: “Were still moulding her. She’s a very push-pull kind of character.

“I think she probably suffers a little bit with narcissistic personality disorder.

“A lot of sentences start with ‘I.’ ‘I this, I that’ and things other people do she relates to herself, but she thinks she’s being very caring.”

When asked if Mary will be staying in Emmerdale for a long time she said: “I’ve got all my toes and all my fingers crossed. I guess it just depends what the powers that be think. I would love to stay in the village for a long time, yes.”

What’s next for Mary?

When asked if she was surprised by Mary’s storylines, Louise hinted something was coming.

However she couldn’t spill anymore details.

Are you looking forward to seeing what’s next for Rhona and Mary?

Read more: How to be an extra on Coronation Street, Emmerdale and EastEnders