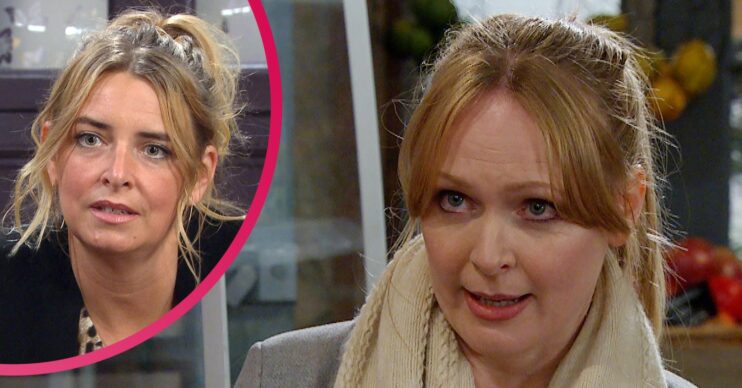 Vanessa Woodfield in Emmerdale: When did she have cancer? Is she reuniting with Charity?

Vanessa Woofield returned to Emmerdale at Christmas and since then she’s set about sticking her nose into everyone else’s business.

As she steps in to support Charity after Marlon’s stroke, using her own health battle as an example of a full recovery, when did she have cancer?

And are she and Charity getting back together?

Emmerdale: When was Vanessa Woodfield diagnosed with cancer?

In March 2020, Vanessa was diagnosed with bowel cancer.

She had been kidnapped by Pierce Harris who found a letter about her appointments and he became the first to know about her health crisis.

The vet had an operation to remove the tumour and lymph nodes, which was a success. However she still needed chemotherapy.

A now-healthy Vanessa uses her experience to help Charity with her fears for Marlon on Wednesday March 23.

As Marlon is in hospital following his stroke, Charity is struggling to cope without him at the pub and is worried he won’t recover.

But Vanessa uses her cancer battle as proof people can get better.

But will that be the case for Marlon?

When did Vanessa Woodfield leave Emmerdale?

Vanessa went off-screen in 2020 as she left the village to go visit her mother who had a bad fall. Vanessa decided to stay with her to help look after her.

In real-life actress Michelle Hardwick was pregnant at the time and the UK had gone into its first lockdown due to the coronavirus pandemic.

When the show resumed production, Michelle didn’t come back to filming as she was pregnant and pregnant women were considered at high risk from the virus.

Why did Vanessa and Charity break up?

In October 2020, with Vanessa away, Charity felt Vanessa had become distant with her and worried she was going to leave her.

Upset, she ended up kissing Moira’s brother Mackenzie, unaware of who he was at the time. However what she didn’t realise was Vanessa’s sister saw this and took a picture.

Later, Vanessa told Charity the reason she was acting distant was because she had an appointment for another scan and didn’t want to worry her.

When did Vanessa return to Emmerdale?

Vanessa came back at Christmas 2021, just as Charity had declared her love for boyfriend Mackenzie.

It really put the cat amongst the pigeons as it soon became clear Charity was not over Vanessa at all.

And when it was revealed Vanessa’s new girlfriend had cheated on her with Nate Robinson, it looked like Charity and Vanessa might reunite.

However, after months of will-they-won’t-they, Vanessa rebuffed Charity’s advances recently.

Are Vanity going to be reunited?

Despite Charity giving Vanessa ‘moony eyes’ and begging for another chance, Vanessa has told her in no uncertain terms they are not getting back together.

Charity has been left heartbroken, especially as Mack has left her too.

He realised she was never going to get over Vanessa and departed for Scotland.

But with Vanessa supporting Charity through Marlon’s health battle, will it bring the pair closer?

Will it ever really be over between these two?

Is a reunion on the cards at some point?