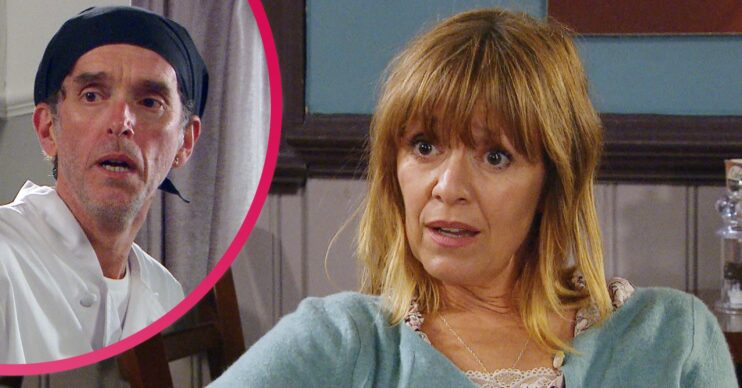 Who is Rhona Goskirk in Emmerdale? How many times has she been married?

What's the latest on her and Marlon Dingle?

Rhona Goskirk first came to Emmerdale for brief stints in 2001 and 2002, and then returned as a full-time character in 2010.

Tonight (Wednesday November 3, 2021) Marlon Dingle pops the question to her in an impromptu proposal. But Rhona thinks he’s joking and Marlon is hurt.

Are these two meant to be?

Rhona’s been through a lot in her time in the village and had a fair few romances too. But who has she been with? And is Marlon truly ‘The One’?

When did Rhona Goskirk arrive in Emmerdale?

Vet Rhona came to the village in 2001 as a locum vet for Zoe Tate. She started a romance with Marlon, but left later that year.

In 2002, she returned to cover for Zoe and rekindled things with Marlon, but she left again in December of that year.

Rhona came back in 2010 to cover for Paddy Kirk when he was out of action after being beaten up by stepson Aaron. She eventually bought into the vet’s and worked side-by-side with Paddy.

She confessed she had been married to an unnamed man, but it had ended and re-started her romance with Marlon for a third time. But their relationship hit a rocky patch when she realised she was developing feelings for Paddy.

Rhona then found out she was expecting Marlon’s baby. Despite the problems that brought to her new relationship with Paddy, Rhona decided to make a go of things. She, Marlon and Paddy are contented co-parents for little Leo.

After an unsuccessful attempt to move to New Zealand, Paddy was arrested for assaulting a police officer, and has his veterinary licence suspended. So Rhona recruited old friend Vanessa Woodfield to join her at the surgery.

When Rhona suffered a back injury she became addicted to the painkillers she was prescribed. Her addiction meant her personality changed and she became aggressive and rude and Vanessa was suspicious.

When she saw Rhona raiding the drugs cabinet at work, she realised what was going on. She tried to help her friend by weaning her off the pills. But Vanessa was hiding feelings for Rhona and things soon got tricky.

Rhona’s addiction got increasingly worse, putting herself and others in danger, and eventually she collapsed.

A spell in rehab and Marlon taking Leo made Rhona realise she had to fight and she kicked her habit.

Rhona befriended Leo’s teaching assistant Tess Harris, and provided a shoulder to cry on when Tess confided that she was seeing a married man.

After Tess died in a car accident, Rhona discovered the married man was Paddy. Heartbroken, Rhona told her husband they had to split.

She also met up with Tess’s widower, Pierce, and told him the truth about what their spouses had been up to.

Rhona got involved with Pierce Harris and it seemed the pair had found happiness after being betrayed.

But Pierce was not a good man and he raped poor Rhona. Despite this, she agreed to marry him – even though she had shared a kiss with Paddy.

But on their wedding day, Rhona ‘fessed up to the kiss with her ex and a furious Pierce raped his new wife once more.

Brave Rhona reported the crime and Pierce was sent to prison.

Moving on with Pete Barton

After recovering from her ill-fated marriage to Pierce, Rhona struck up a romance with younger man, buff farmhand Pete Barton – lucky her!

But there was more trouble in store for Rhona when she was run over by Matty Barton and had to have an operation, leaving her unable to have any more children.

With their romance on the rocks, Pete was seduced by Kim Tate, who wanted to get her grubby mitts on the vets’ practice, Rhona kissed Nate Robinson and it was time to call it a day.

Rhona was delighted when she found happiness with smooth Graham Foster. He seemed to really love her, though he wasn’t completely truthful about his former relationship with Kim Tate.

When Rhona and Graham’s romance was revealed, Kim was furious (uh-oh!) and she did her best to split them up. When that didn’t work, she vowed to take revenge on the happy couple.

So they decided to leave Emmerdale for France. But before they could make their escape, Rhona was devastated Graham was murdered.

At first, Rhona was convinced Kim was Graham’s murderer but when she discovered that Pierce was out of prison, she started to think he was the culprit. She worked out that Pierce had been stalking her since he was released and that wasn’t the half of it!

In fact, Pierce had kidnapped Vanessa and her son Johnny, in an attempt to get Rhona to meet him. The brave vet confronted her attacker, and managed to get him to confess to his crimes – while she live-streamed his confession!  What a she-ro!

With Pierce behind bars once more, Rhona used the money she’d inherited from Graham to help Moira Barton with the farm’s finances. And she was soon rekindling her romance with Leo’s dad, Marlon Dingle.

Are Rhona and Marlon for keeps?

As Marlon prepares to make it fourth time lucky for him and Rhona, she thinks his proposal is a joke and he’s forced to hide his hurt.

But on Thursday, November 4, 2021, Marlon is given hope. Will he manage to get a ring on her finger? And is this relationship for keeps?