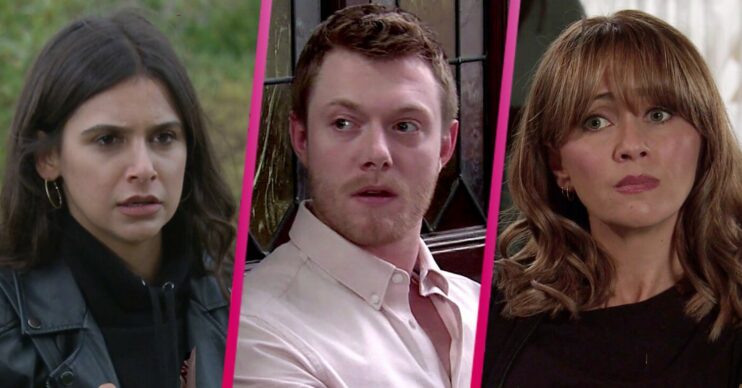 When are Coronation Street and Emmerdale on next? Soaps are both off air until Tuesday

Coronation Street fans have been left furious that the soap isn’t due to air again until next week.

By the time we head back to the cobbles, it will have been six days since we were last there.

Meanwhile, Emmerdale is airing its usual Thursday double bill tonight (November 11), but then will also be off air until next week.

Read more: Coronation Street fans slam Dev as he threatens to call the police on Aadi

When are Coronation Street and Emmerdale on next?

Coronation Street is not airing its usual Monday double episode. Instead, we’ll visit the Street on Tuesday, November 16, instead.

The soap will air for an hour at 8pm.

Before Corrie, Emmerdale, which is also not on on Monday, November 15, will too show an hour-long episode, at 7pm.

This will cause another clash of the soaps, similar to what happened on Tuesday, November 9, where Emmerdale and EastEnders went head to head, before Corrie and Holby City were pitched against each other.

Why are Coronation Street and Emmerdale not on?

Both shows have been bumped to make way for live international football.

On Friday, November 12, England will take on Albania in a World Cup qualifying match.

Then on Monday they are up against San Marino hoping to replicate their 5-0 victory and top their group table.

What are fans saying about the move?

Soap fans are not at all happy about their favourite shows being taken off air for football.

As the ITV announcer revealed the next outing to the cobbles was almost a week away, viewers shared their annoyance on Twitter.

Dear #Corrie producers, I’m disappointed that you’ve scheduled in another Tuesday episode, which clashes with #BakeOff. If you have to show a football match then can’t you reschedule #CoronationStreet to a Thursday? I really hope this doesn’t happen again in #GBBO final week.

No #Corrie until next Tuesday😒

Bloody football 🙄🙄 oh well at least we have #EastEnders 👏🏼👏🏼 #Corrie

What is happening in Coronation Street next week?

Things are looking pretty bleak for Kelly as she finds herself with nowhere to stay and sleeping on the streets.

She heads into a hotel to charge her phone, but is caught by the receptionist. Kelly’s grateful when another guest, Alan, comes to her rescue, but when he invites her to his hotel room, she’s unsure.

Later, out of options, she knocks on Alan’s door – will she sell herself for a bed?

Meanwhile, Tim is worried when he visits Faye in prison, so Sally and Debbie resolve to help by getting Ray to plead guilty to her sexual assault.

Will sex pest Ray really do the right thing though? Or does Debbie have an ace up her sleeve?

Elsewhere, Lily chokes on a lollypop and only Sam can save her. Will he find his voice to rescue his cousin or is she going to die?

Also, Tyrone finds himself knocked out when Isla’s husband catches them on a date together.

What happens in Emmerdale next week?

Chas is growing increasingly fond of Al, but Paddy and Marlon are sick of the changes, including hiring Ellis and introducing a new uniform.

Al makes a flirty comment to Chas, and she tells him he’s overstepped the mark. But it soon becomes clear his approach might just be working on her a little too well…

Meanwhile, Noah and Chloe plan to have sex and Mack offers his advice. But he realises he’s made a mistake when Charity says she doesn’t want Chloe anywhere near her family.

But Noah and Chloe have decided to run away together. Can Kerry bring them home before Chloe’s dad’s thugs do some serious damage?

Also, Amy takes on Meena and reports her to the police when she breaks into her house and smashes the place up. Billy intervenes in their row and defends Meena – and suddenly the psycho killer has a new victim and a new man in her sights…

Next week Emmerdale airs Tuesday to Friday at 7pm on ITV, with an extra episode at 8pm on Thursday. And Coronation Street is on, Tuesday at 8pm, and Wednesday and Friday at 7.30pm and 8.30pm.