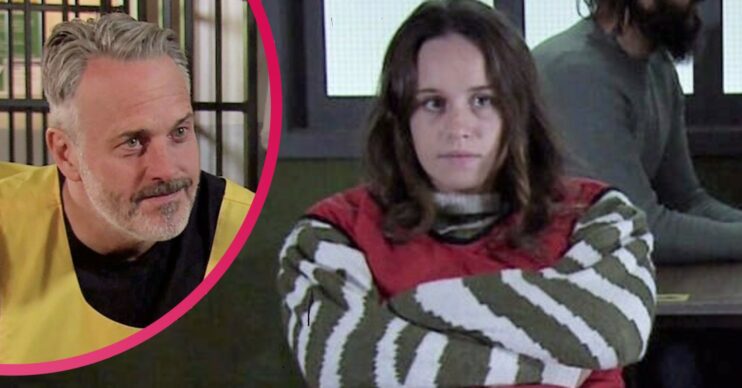 She's back on our screens next week

Coronation Street spoilers for next week reveal the return of Faye Windass.

Fans have been wondering for some time where Faye was and whether she had left the show. But after several long months off our screena, we’ll see her in prison next week.

Where has Faye Windass been in Coronation Street?

The teenager was sent to prison for attacking Adam Barlow after mistaking him for her rapist Ray Crosby.

But other than one visit from her brother Gary Windass, Faye hasn’t been seen since April when she first went down.

Fans have been asking where she is, believing we should have seen her inside. One said: “To all Corrie fans. Does anyone know what happened to Faye Windass?

“I thought she was on remand pending a trial but she seems to have vanished.”

A second said: “Although Faye Windass was a major part of Seb’s storylines. Why have we not once seen Faye’s reaction to his death?”

A third said: “Is Faye Windass in jail? If she is why doesn’t anyone go an see her?”

What happens with Faye on Coronation Street next week?

At last someone from Faye’s family pays her a visit. Her dad, Tim Metcalfe, goes to see her inside.

He’s concerned though, knowing she isn’t herself and she is struggling to cope.

Tim voices his fears to Sally and says he wishes there was something they could do to get Faye out. But with her facing at least two more years inside, there’s little hope.

As Tim talks to Sally about her fears for his daughter, Sally decides to try and help. She talks to Debbie, revealing they’re all really worried about Faye and asks for her help.

Debbie is the only one who might be able to get to see Ray, also in prison. Sally thinks if they can get Ray to confess to the sexual assault on Faye, it might help her appeal case.

Why does Debbie go to see Ray in prison?

Debbie sets up a prison visit and sits down opposite Ray. She gives him an ultimatum: he admits what he did to Faye or she’ll report him for the death of Johnny Connor.

Debbie reveals she knows Ray was responsible for the sinkhole in the Platts’ garden that caused Johnny’s death.

Ray is either facing a charge or sexual assault or manslaughter. It’s a grim choice, but which will he decide?

And what does this mean for Faye’s future? Will we see her back on the cobbles before long – or is this the end for Faye?

She remains a member of the cast and likewise Faye remains a character in the show.

It isn’t known when Faye will get out of prison and return to the cobbles but Ellie recently confirmed to Loose Women that she has no intention of quitting the soap: “No, no. Not going anywhere for the time being.”