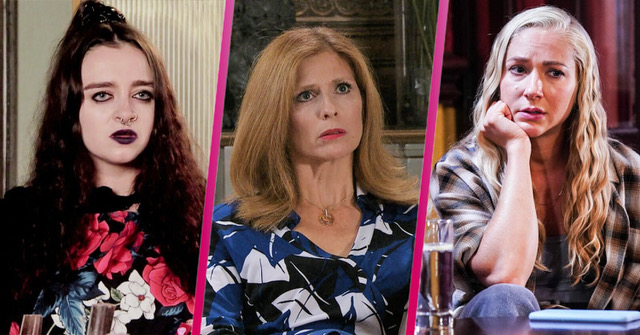 All the soaps are on tonight - what to watch and when

Coronation Street is airing a double episode tonight and Emmerdale is on for an hour, causing a huge clash of the soap titans as they go up against EastEnders.

The extra half hour of Emmerdale will mean fans will have to choose between watching that and EastEnders.

And Corrie will go head-to-head with Holby City when it airs its episodes starting from 8pm.

When are the soaps on tonight?

Emmerdale airs in its usual 7pm slot, however it is on for an hour instead of its usual half hour.

That means it’ll clash with EastEnders, which airs as normal at 7.30pm.

Holby City begins at 7.50pm on BBC, so that will overlap with Emmerdale by 10 minutes. It will then go up against Coronation Street, who are airing an hour-long episode on ITV at 8pm.

Why have the soaps changed their schedule this week?

On Friday, November 12 at 7pm ITV are airing an England international football match. The team will go up against Albania in a World Cup Qualifier.

That means both Emmerdale and Coronation Street won’t be airing on Friday.

However, EastEnders is unchanged and will go out at 8.05pm as usual.

What is happening on Emmerdale tonight?

Jai is determined he won’t pay for what happened during survival week and sets it up so someone else takes the fall.

As he prepares for a health and safety inspection, he knows his livelihood is on the line and makes plans for Ben to take the blame.

But Laurel is horrified when she finds out his plot – will he go through with it?

Meanwhile, Kim is faced with an ultimatum from Will, who won’t stand for the way she’s treating Paddy and Chas. As the Tate matriarch makes a huge decision, what does this mean for her future in the Dales?

Also, Bernice takes the brunt of Nate’s anger after he lays into her for raising Gabby as a spoiled brat. Will leaps to Bernice’s defence, but will she take his actions as more than friendship when they bond?

Kelly faces an impossible situation when she’s accused of scratching Dev’s new car. She actually has an alibi: she was in York with her mate from her accommodation getting a ring for Nina.

Nina isn’t impressed with Kelly’s gesture though, which was to replace the missing ring Seb gave her, and literally throws it back in Kelly’s face.

However, Kelly’s alibi denies having seen her at all, and Craig is forced to question Kelly. Is she heading back inside?

Elsewhere, Summer is smitten with Daniel and gets totally the wrong end of the stick when she overhears him talking to Adam. And Max is equally smitten with Summer, but she has no idea.

Tyrone is also faced with making a solar system for Ruby, and Leanne vows to help Sam no matter what.

The fallout from the reveal of the baby daddy continues as Sharon struggles to comprehend the news her 14-year-old son, Denny, fathered a child before his death.

As Granny Sharon tries to take it in, Zack talks to Jada in the cafe, wanting to get to the bottom of what’s going on.

She admits she can’t look after her baby, but will Zack change her mind?

Meanwhile, Callum is tempted by a flirty guy on a night out who gives him his number. Will he cheat on Ben? And are the couple heading for a split?

Emmerdale airs tonight at 7pm on ITV, EastEnders is at 7.30pm on BBC One, and Coronation Street goes out at 8pm on ITV.