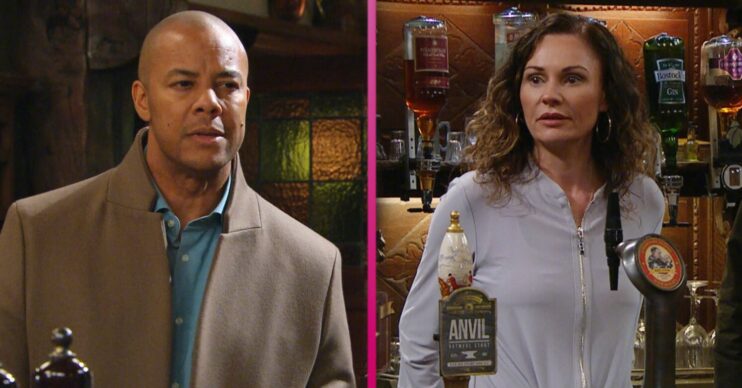 It would break Paddy’s heart

Emmerdale spoilers for next week show Chas getting closer to flirty Al as their business partnership intensifies.

The last thing Paddy wanted was for Chas to get into bed with Al in the business sense, but they had no choice.

Now Al is making his presence felt at the Woolpack, he and Chas have been thrown together more.

Will the attraction that sparked between them last year be reignited?

Emmerdale spoilers: What is the history between Chas and Al?

When Chas was struggling with her dissatisfaction with her life, Al provided a shoulder to cry on.

She felt that her husband Paddy was ignoring her and was fed up with the domestic drudgery at home.

Al was the person who she confided in, even though he was engaged to Priya at the time.

So, when Chas tried to make a saucy suggestion, he knocked her back – and she lived to regret being so forward.

This time, though, things are very different.

Al’s shares in the pub give him an equal say in how the Woolpack is run.

Marlon is struggling as he makes changes to the menu, hires son Ellis without asking and then sets up a beer tasting with a new brewery.

Al even brings in a new staff uniform for the pub and makes a flirty comment to Chas that shocks everyone.

Has he crossed a line?

Is Al after Chas?

Chas confronts Al about his saucy comment and reminds him they are professional colleagues. Not to mention the fact she’s married to someone else.

He’s apologetic and promises that he won’t do it again, but there’s still a twinkle in Al’s eye.

When he hears that Paddy is away on a course, he asks Chas to join him for a business dinner to go over some ideas he’s got for the Woolpack.

During their supper, Al heaps more compliments on Chas, who seems to be warming to his smarmy style.

Will she be tempted to cheat on Paddy and give Al what he clearly wants?