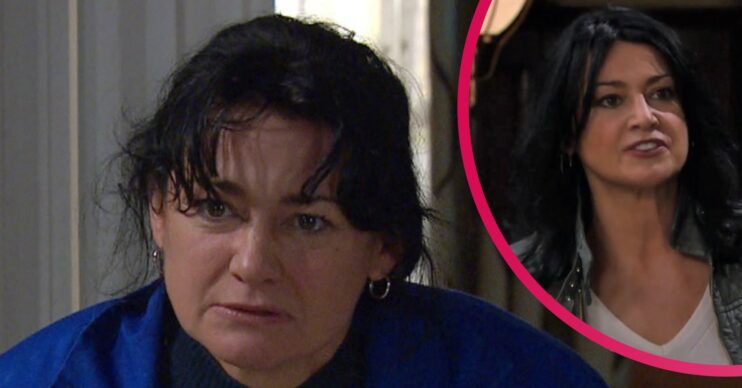 She made a brief appearance looking smoking hot last night

Emmerdale fans were thrilled to see Moira Dingle back on their screens last night, if only for the briefest of scenes.

But as much as they loved her feisty appearance, they were also bowled over by how she looked!

Far from the grubby farm worker we usually see, with hair tied back and overalls on, Moira looked super-glam – for no real reason!

What did fans say about Moira in Emmerdale last night?

On Tuesday, November 9, Moira stormed into the pub to confront Paddy and Chas about Kim’s stolen horse.

“Why is there a stolen race horse in my barn? Are you trying to get me arrested?” she demanded.

Despite Chas and Paddy trying to explain, Moira raged: “I don’t want to get involved, so I don’t want to hear your plans. I just want that animal off my farm.”

She then added: “I want that horse off my land by the end of today.”

Moira left the pub after that. But while many loved her straight talking, it was her glossy hair and made-up face that really got viewers talking.

I noticed that!
Moira certainy didn’t look like someone who’s been running a farm, more catwalk than cow-work 😂#Emmerdale pic.twitter.com/pBVeQ3ulmZ

Has Moira done something different to her hair? Looking good! #Emmerdale

Blimey, Moira’s had a makeover! #emmerdale

Why is Moira all tarted up? #Emmerdale

Why did Chas and Paddy steal Kim’s horse in Emmerdale?

Kim has been forcing Paddy to dope her race horse to make him win more competitions.

Vet Paddy has been desperate to get out of the partnership and Chas decided to help him.

Their original plan to record Kim confessing to what she was doing then use it to blackmail her, failed when she refused to show up to the meeting.

So they resorted to plan B – taking the horse.

They horse-napped him and stored him in a barn at Moira’s farm. But Moira’s friend and business partner Rhona found the steed and agreed with Moira they didn’t want the trouble of being at war with Kim.

Kim originally threatened to call the police on Chas and Paddy, but after Will told her he’d leave her if she didn’t stop with this sort of behaviour, Kim changed her mind. She let Paddy off the hook and told them to return the horse and they’d say no more about it.

Kim then departed the village, but is this really the last we’ll see of her?