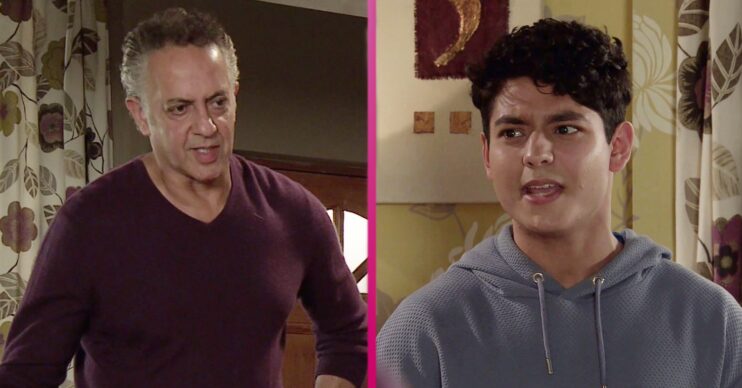 Coronation Street: Dev slammed by viewers as he goes to call the police on Aadi

Aadi has been feeling as if Dev favours Asha

Coronation Street fans have slammed Dev as he went to call the police on his son Aadi after everything he’s has been through.

For a while, Aadi has been left thinking Dev favours Aadi’s twin sister, Asha.

In this week’s episodes, Dev offered his son the position of manager across his shops after Aadi expressed he wanted to go and work in London and wanted Dev to cover his rent.

However when Aadi discovered his dad was unable to afford to pay his rent in London, because he was paying to keep the video of Asha stripping off the internet, he realised that’s why Dev offered him the managers position and began to feel as if his sister was being favoured, again.

He proceeded to steal a bottle of alcohol from Dev’s shop, shut the store early and get drunk.

While drunk he scratched Dev’s car with his key. However when Dev found out about the damage he presumed it was Kelly Neelan, who had just been released from prison.

In last night’s episode (Wednesday, November 10) Aadi told Dev how he felt Asha was his favourite, especially after Dev saved her first in the car accident.

Aadi confessed to his dad he was the one who damaged his new car.

Furious, Dev rang the police to report his son and tell them it wasn’t Kelly. However Asha tried to convince Dev not to tell them it was Aadi and just say that he knows Kelly wasn’t involved.

Asha went to see Kelly and told her Dev told the police it wasn’t her.

It was later revealed Dev decided not to give Aadi’s name to the police. However fans were horrified that he would think to do that, especially after everything Aadi had been through.

#Corrie Wow !!! Dev brushes off Aadi’s accusations of favouritism, tries to make him feel bad about bringing it up and calls the police on him for scratching his car

Asha, being the favourite, takes her dad’s side

Aadi is better off away from the Alahans 🙁🙁🙁🙁

You only have yourself to blame Dev for the way Aadi feels. Don't feel sorry for Dev at all 😬😬#Corrie

A couple of weeks ago, Dev, Asha and Aadi were involved in a car crash. Dev and Aadi woke up to find smoke coming from the vehicle, meanwhile Asha was in the back unconscious.

Aadi’s foot was trapped and he begged his dad for help, however Dev went and got Asha out the car first.

Soon the car exploded, but luckily Aadi got himself out, but he felt like Dev favoured Asha.

Read more: Who plays Penny in Coronation Street? Actress Emma Stansfield has been in the show before