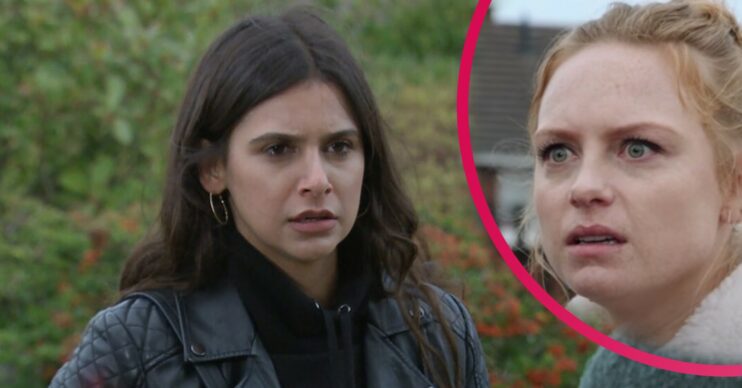 Has she rumbled the truth?

Emmerdale spoilers for next week tease big trouble for Meena when Amy tells the police what she’s been up to.

The killer nurse has been hiding in plain sight for months, but her luck might run out now she’s crossed Amy.

It’s Meena’s anger at Victoria that could prove to be her undoing as things spiral out of control.

But will the police realise that they are dealing with a fully-fledged serial killer bringing death and misery to Emmerdale?

Things haven’t gone the way that Meena was planning during the deadly survival challenge.

She’d hoped to kill Victoria and get her boyfriend David to herself, but she failed.

Now David and Vic are all loved up, and dumped Meena is determined to win back her man.

Read more: Who is Kerry Wyatt in Emmerdale, who did she kill and where has she been?

Nicola, who also once dated David, eggs Meena on but neither Amy nor Manpreet are impressed.

On hearing that the new couple has gone to Portugal for a break, she lets herself into Vic and Amy’s house and trashes the place!

When Amy comes home to find her place turned upside down, she knows exactly who’s responsible.

She immediately calls the police, and PC Swerling is soon knocking on Meena’s door.

However, during the informal interview, Meena denies everything and no arrest is made.

Amy is incensed when she hears Meena has seemingly escaped justice and confronts her in the street.

It looks like the girls are going to come to blows until Billy jumps in to break up the drama.

Meena is thrilled that a handsome man has come to her rescue and calls Billy ‘my knight in shining armour’.

Is Billy destined to become the new object of her obsession?