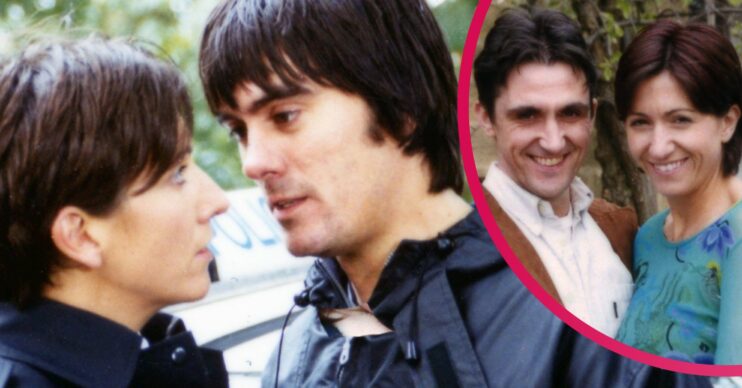 Cain blamed himself for Angie's tragic death - but was he responsible?

In fact, he did worse than that when he slept with her underage daughter, Ollie.

But just what went exactly went on between criminal Cain and his policewoman lover?

Who was Angie Reynolds?

Angie was a happily married mum of two when she moved to the village with her husband Sean (played by Stephen McGann), son Marc and daughter Ollie (aka former Corrie star Vicky Binns), early in 1999.

But it wasn’t long before their family was falling apart.

Angie was injured in a bus crash, Sean began a torrid affair with Lady Tara Oakwell, and Marc was one of a group of teens who knocked over and killed their head teacher.

Despite being a police officer and well aware of Cain’s criminal past, Angie was lonely and she fell for Cain’s charms – he was a lot less grumpy back then!

The pair began an affair, with Cain really falling hard for Angie and viewers seeing a different side to the Emmerdale bad boy.

Cute! But not for long…

When Angie and Sean managed to get their marriage back on track, and she called off her romance with Cain, things took a dark turn.

Determined to get back together with Angie, Cain told his ex-lover that unless she rekindled their romance, he’d seduce the Reynolds’ teenage daughter, Ollie.

With Angie reluctant to get back with Cain (can’t imagine why), he began wooing Ollie, who was just 16 years old and eventually slept with her.

He wasn’t lying when he told Noah he’d done some awful things.

And that was just the start.

Cain wasn’t finished yet. He told everyone in the village about his affairs with Angie, and Ollie. And when a furious Sean confronted him and punched him Cain reacted in a very uncharacteristic way.

He didn’t punch back!

Instead, he pressed charges against Sean and told the police all about his affair with Angie and got her suspended.

Surely that was enough revenge?

Oh no. The toxic twosome were just getting started.

With Angie having lost everything, she told Cain she wanted in on a job to rob Tate Haulage. The pair plotted their robbery, but Cain didn’t know Angie was planning to set him up to be arrested.

When Cain drove off at high speed to escape the ambush, Angie and another officer followed in a police car.

Determined to get away, he parked round a bend and turned the headlights off. The police car overtook him, but Cain watched on in horror as the car lost control, flipped over and crashed.

He rushed to drag an injured Angie from the wreckage and held her in his arms as she died.

Angie asked Cain to tell her kids that she loved them, and he begged her to say that she loved him. But Angie died without saying the words Cain wanted to hear. Instead her final words were: “Tell them I’m sorry.”

Tonight (Friday, May 13) Cain was seen talking to Noah about his stalking of Chloe.

Trying to make the Dingle lad see what he has done is wrong, Cain referenced his own past mistakes with Angie.

Although he slightly understated it when he said he’d “done something daft”, he acknowledged he’d hurt her badly and expressed his regret at his behaviour.

Will it be enough for angry fans, though, who have demanded he get axed over his past sex abuse shame?