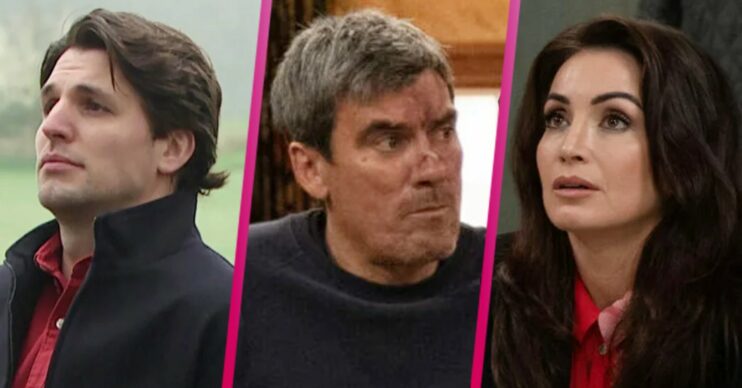 Someone's past comes back to haunt them

Emmerdale spoilers for next week reveal Ethan is subjected to a violent – and potentially deadly – racist attack. Will the villager be okay?

Elsewhere, more of Suzy‘s past is revealed, resulting in heartbreak for Moira.

Cain, meanwhile, has a death wish for Faith.

Find out about all these explosive Emmerdale spoilers and more below.

Emmerdale spoilers for next week

Jordan confronts Billy and makes it clear he’s part of a gang.

Al witnesses the intimidation and subsequently agrees to go to the police.

But will it be enough to send him down?

Ethan is stressed when even his dad expresses doubts over him representing Jordan.

Feeling like everyone is against him, Ethan decides to pull out of the case and so meets Jordan.

He tells him he can no longer be his solicitor, however Jordan does not react well…

As Jordan’s racist rant is unleashed on Ethan, Jordan’s wife, Courtney is sickened.

Realising she’s married to a racist she doesn’t want to be around him any more and therefore leaves.

Her departure only serves to make Jordan even more angry, however…

Ethan is relieved to be off the case and heads home, meanwhile Jordan follows him into a subway.

He begins shouting more racist abuse, but Ethan fights back. Jordan responds, however, by throwing Ethan to the floor.

As Jordan raises his fists, it’s clear Jordan is capable of hurting him badly. Will Ethan be okay?

Suzy and Leyla put a business proposal to Moira that she hire out her barn for weddings. Moira is inspired by the idea until Suzy puts her foot in it…

Moira goes silent when Suzy suggests using the field where Holly is buried. Leyla gestures towards Holly’s photo to get Suzy to back off.

But it has quite a different affect…

It’s clear Suzy recognises Holly and so she quickly makes her excuses and leaves.

Leyla is baffled, but when she finds Suzy browsing an internet remembrance page for Holly, Suzy opens up.

She reveals she knew Holly and Leyla is overwhelmed by what Suzy has to say.

Cain wishes Faith dead and Moira is left reeling by his nasty words.

Faith is desperate for them to heal their differences, but Cain is unforgiving.

Realising she has to start making amends somehow, Faith apologises to Dan.

He’s taken aback, but will it be the start of a healing process for Faith and the village?

Marlon is worried about returning home from hospital, however, Mary tries to reassure him.

When Kit, Marlon’s physio, arrives for their first session, Marlon is clearly anxious.

The session is a struggle and Marlon is therefore left dejected.

Read more: 6 theories on who Gabby shot in Emmerdale

With Marlon feeling frustrated, Kit recommends painting. The idea is it will help him with his motor control.

Mary realises she must do something so steps in to change his mind. Can she?