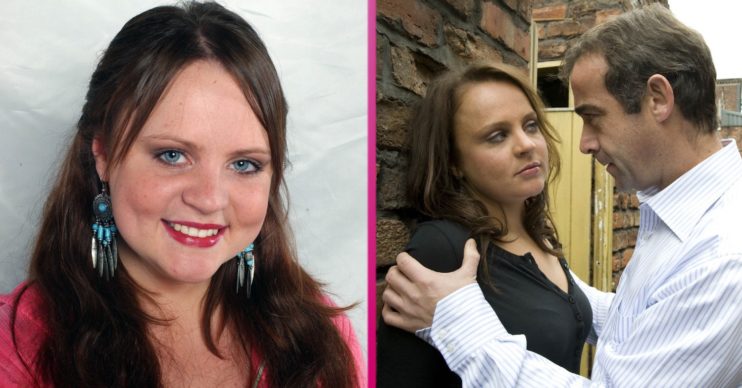 Molly Dobbs in Coronation Street: Who is she and what happened to her?

Molly is the mother of Jack Webster

Molly Dobbs was in Coronation Street from 2005 until 2010. But who is she and what happened to her?

Recently Fiz discovered her fiancé Tyrone Dobbs had cheated on her with Alina Pop.

Fiz confided in her ex-boyfriend and good friend Kirk Sutherland about what Tyrone had done and he told her he was shocked Tyrone cheated, considering what happened between his first wife Molly and best friend Kevin.

But what happened between Molly and Kevin?

Molly Dobbs in Coronation Street: Who is she?

She is also the biological mother of Jack Webster and was the first wife of Tyrone Dobbs.

Read more: Amy Barlow in Coronation Street: Who plays her and who are her family?

Molly first appeared in September 2005. Shortly after her first arirval it was revealed that she was the victim of bullying in school and one of her bullies was Fiz Brown (aka Fiz Stape).

Shortly afterwards she began dating Tyrone Dobbs and moved into 9 Coronation Street with Tyrone and Jack and Vera Duckworth, who were surrogate parents to Tyrone.

In 2009 Tyrone and Molly got married.

The character was played by actress Vicky Binns.

Molly Dobbs in Coronation Street: What happened between her and Kevin?

Molly struck up a friendship with Tyrone’s best friend and business partner Kevin Webster. They soon began training for the local fun run together.

Eventually the pair began having an affair.

Although things were on and off between them, they started to fall in love and around Christmas 2009, Kevin planned to leave his wife Sally and Molly planned to leave Tyrone, so they could start a new life together.

However before Kevin told Sally about the affair, Sally revealed she had breast cancer. Wanting to stand by her, Kevin ended his affair with Molly.

Molly promised to be a better wife to Tyrone, however she ended up leaving him as she no longer felt attracted to him.

She soon moved out but discovered she was three months pregnant and was unsure who the baby’s father was.

When she told Kevin, he refused to have anything to do with her and the baby. Eventually Molly went back to Tyrone telling him she was pregnant with his baby.

Molly gave birth to a son in September 2010, who she and Tyrone named Jack after Jack Duckworth.

Later, Kevin stole Jack’s dummy to have a DNA test and the results revealed he was Jack’s father.

Molly Dobbs in Coronation Street: How did Molly die?

In December 2010, Molly wanted to leave Tyrone and leave Weatherfield. When Tyrone demanded she couldn’t take his son, she confessed Jack wasn’t his, but didn’t reveal who the father is.

As she headed to the bus stop to go to her dad’s house, she stopped at the corner shop to say goodbye to her friend Sunita Alahan.

Whilst Sunita was in the back, Kevin turned up and Molly told him to say goodbye to his son.

After Kevin left the shop he went and crossed the road before a massive gas explosion ripped open The Joinery Bar (now known as the Bistro) in the viaduct.

Molly left the shop with baby Jack to see what happened and was horrified to see a tram coming along the track about to derail.

As it derailed, Molly ran back into the shop with her son and the tram came crashing into the building.

Molly and Jack were caught in the rubble. Emergency services got the baby to hospital but they needed special equipment to move Molly.

She was bleeding heavily and Sally was allowed in to be with her. Molly told Sally as she was dying Jack needed his father and confessed Kevin was Jack’s dad.

Molly begged Sally not to hate her and she died moments later.

What happened to baby Jack?

After Molly’s death, Jack stayed with Tyrone. At Molly’s funeral, Tyrone discovered Kevin was Jack’s father and the man she had been having an affair with.

Later he handed Jack over to Kevin and was left heartbroken.

Over the years, Tyrone and Sally eventually forgave Kevin for what happened and they all became friends.