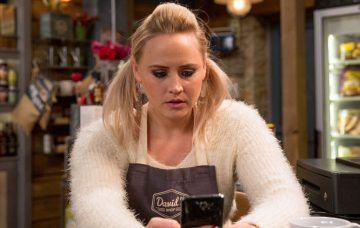 She deserves a happy ending...

Tracy Metcalfe has had the year from hell in Emmerdale, so it’s reassuring to know the ITV soap is lining up a new romance for the popular character.

Viewers know that her life was turned upside down in August when her dad Frank Clayton died in the factory fire.

As well as witnessing her beloved dad’s death in the explosion, the shop assistant also blamed herself as her dad entered the burning building to save her.

He sacrificed himself for his youngest daughter, who had been hiding in a cupboard to meet lover Billy for a ‘quickie’.

There’s a flirtation going on between Tracy and Pete at the moment, so I’m hoping she’ll get some kind of happiness there.

Tracy also discovered that Kerry Wyatt and her daughter Amy were to blame for starting the fire, but agreed to keep the secret quiet – for now.

After a nightmarish few months dealing with the grief of losing her dad, Tracy is set for some happiness at last as scriptwriters give her a new romance in upcoming scenes – and some viewers have already noticed the bond between the pair.

Tracy will find herself attracted to handsome Pete towards the end of this year, whose ex-girlfriend Rhona Goskirk recently moved on with Graham Foster.

But Tracy’s romance could well be short-lived as Pete is due to exit the show next year.

Anthony Quinlan, who has played Pete since 2013, recently announced he would be leaving the show, meaning that his fledging relationship with Tracy won’t be long term.

Speaking to The Inside Soap Yearbook 2020, Amy said: “There’s a flirtation going on between Tracy and Pete at the moment, so I’m hoping she’ll get some kind of happiness there.

“I want her to find love, even if it’s not with Pete.

“I’d love to work with Matthew [Wolfenden] again, but getting back with David isn’t the right thing for Tracy. She’s too good for him!”

Tracy and David split up last year, when he struggled to come to terms with her past as a prostitute.

Although she got pregnant with his baby after they split, she aborted it believing it to be for the best.

David later got together with Maya Stepney, and we all know how THAT ended!

Would you like to see Tracy get her happy ending? Let us know on our Facebook page @EntertaimentDailyFix.