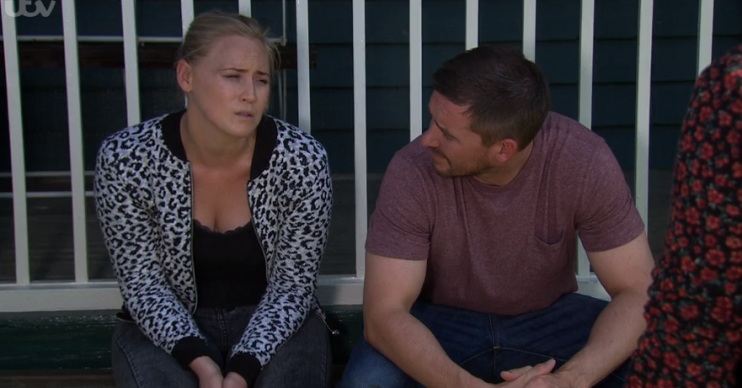 Pete recently split up with Rhona

Fans of Emmerdale have predicted romance for Tracy Metcalfe and Pete Barton.

It’s been a tough couple of weeks for Tracy after the death of her dad Frank Clayton.

On Monday’s episode (August 26 2019) a funeral was held for Frank, however, the turnout wasn’t huge due to people believing he started the factory fire and stole the charity money from the safe.

Pete showed up at the wake apologising to Tracy for not being able to attend the funeral.

Tracy asked her friend if he thought Frank started the fire but Pete reflected on the loss of his own dad in order to help Tracy.

He said: “I thought my dad committed suicide, you know because that’s what the police said. So I had to accept it. Turns out they were wrong.”

Tracy said she thought the police were wrong about Frank and Pete told her: “If that’s the case, you owe it to him to find out who it was.”

Pete and Tracy were then seen chatting again up at the cricket pavilion in last night’s episode (August 27 2019).

When Amy and Kerry took Kyle up to the field for a kick about with a football, the pair were sitting on the decking having a chat.

When Tracy said she thought more people liked him and she knew that he did bad stuff in the past, Pete was quick to assure her that Frank was a good dad and grandad.

Emmerdale fans have predicted there will be romance on the cards for Pete and Tracy.

Tracy/Pete will totally get together #emmerdale

Tracey and Pete are so gonna get together…#Emmerdale

Pete and Tracy is so random but it works…#Emmerdale

The Tracy and Pete scenes are really quite nice, but it's so sudden? #Emmerdale

Pete recently split up with his fiancée Rhona Goskirk. After cheating on both sides, the pair decided to get engaged.

However, their engagement was soon broken off and the pair split when Pete realised he wanted kids of his own and Rhona was unable to have anymore children.

Tracy was sleeping with Billy Fletcher but after the fire, she blamed herself and Billy for Frank’s death.

Tracy hid in the cupboard to surprise Billy, however she ended up getting trapped as the fire started.

Although the villagers believe Frank started the fire, Amy and Kerry were responsible.

They destroyed the CCTV to cover up their theft of the charity money, but didn’t plan on starting a fire.