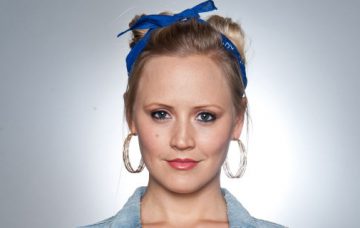 Is she expecting her estranged husband's baby after their recent romp?

The troubled marriage between Tracy and David Metcalfe hits another snag next week when Tracy learns her estranged husband has spent the night with another woman.

The woman is question is none other than GP wife and local teacher Maya Cavanagh who David has grown increasingly close to in recent weeks.

The pair have been drawn together by Maya teaching David’s ‘son’ Jacob and by their shared discovery that they both have rubbish marriages.

It was only last week that Tracy found herself stunned after overhearing Maya’s husband Dr Liam Cavanagh confront the pair over their deceitful behaviour.

But when Tracy’s dad Frank Clayton spies Maya leaving David’s in the morning, he wastes no time in telling his daughter what he’s seen.

But Tracy leaves him shocked when she reveals a bombshell of her own. What could it be?

Emmerdale fans already think that Tracy is up the duff following her afternoon of delight with David while she cleaned for Eric Pollard recently.

Trace seemed to be about to take her cheating hubby back when she walked in on the unfortunate scene at the shop with David, Maya and Liam.

But when she heard all the accusations flying around, she raced home to tell sister Vanessa that their divorce was on like Donkey Kong.

It was only a couple of weeks ago that Tracy found herself warming to David and the couple ended up having an afternoon of delight at the B&B.

Tracy insists it was a mistake though and fans are convinced that the feisty blonde is pregnant as a result of the impromptu hook-up.

One fan predicted: “I mean Tracy is definetly ending up pregnant isn’t she?! And this will be me….”

Another said: “Can’t help but think Tracy is gonna end up pregnant after last week’s “mistake” with David.”

While a third added: “I have a new theory : David and Tracy sleep together…she inevitability gets pregnant ( after all there is no contraception in the village), they reconcile and then bam…Leyla comes back with David’s baby.”

I mean Tracy is definetly ending up pregnant isn’t she?! And this will be me….#emmerdale pic.twitter.com/4sbbtjVrj2

I have a new theory : David and Tracy sleep together…she inevitability gets pregnant ( after all there is no contraception in the village), they reconcile and then bam…Leyla comes back with David's baby #emmerdale

David and Tracy split earlier this year when Tracy discovered that her husband had been unfaithful to her with his ex Leyla Harding.

Tracy actress Amy Walsh has teased that there will be fireworks between her character and Leyla when co-star Roxy Shahidi – who plays Leyla – returns from maternity leave.

Amy spoke to OK! Online about what would happen when Tracy and Leyla eventually come face to face.

She said: “Oh yes, there will be fireworks! There’s a lot to answer for!

“Tracy confronted her quite a few times about her feelings for David. And once again, Tracy was made out to be the bad guy because she was making her leave the village.

“I think she’s got a lot to answer for and a lot to make up for!”

Tracy thought that David had hooked up with Priya, who is the mother of his daughter Amba, and was horrified when David tripped himself up and admitted he’d slept with Leyla.

“Tracy was there for Leyla when Priya did the dirty on her. It’s a very hypocritical thing for Leyla to have done as well as morally – so wrong!”

Think Tracy’s preggers? Let us know by commenting on our Facebook page @EntertainmentDailyFix!

Emmerdale airs week nights at 7pm on ITV with an extra episode on Thursdays at 8pm. Times may vary due to World Cup fixtures.