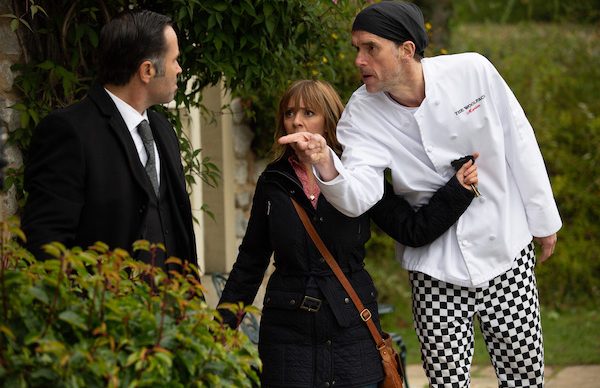 Graham has been seeing Rhona, the mother of Marlon's son Leo

Things are set to turn violent when a furious Marlon punches Graham in next week’s Emmerdale.

But neither of them see that Rhona has arrived.

As Kim quickly makes tracks, Rhona tears into the chef for siding with Kim and for the first time Marlon begins to softens towards Graham.

Later at the cafe, Rhona shares some harsh words with Kim for trying to poison Marlon against Graham.

However Kim assures her that her success winning Marlon over won’t last and she begins to come up with a plan.

Graham tries to reassure Rhona but it’s obvious he’s thinking about the possibilities of what Kim is plotting. And it’s not long before he finds out what her plan is…

The next day Graham gets a text from Kim asking for employees to meet her at the pub as she has an announcement.

Graham’s jaw drops when he realises the reason Kim has thrown the party.

As Kim makes a revelation, Rhona is left seething at what she’s done.

Whatever she says clearly doesn’t go down well with Rhona as Graham attempts to apologise to her but he’s soon stopped by Marlon, who punches him.

But will Kim’s plan be short-lived?

Fans of the show know Kim was furious when she found out Graham had been seeing Rhona.

But has she taken things too far?