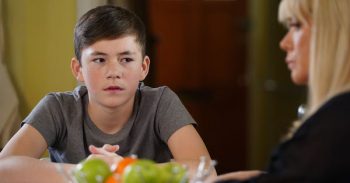 Dennis is currently caught up in the middle of family drama

Ever since the 13-year-old discovered his mum Sharon Mitchell cheated on his stepdad Phil Mitchell, resulting in her falling pregnant with Keanu Taylor’s baby, he’s been acting out.

After failing to go with Phil and stepsister Louise to Portugal, Denny has been living with the Carters.

However fans think Dennis could soon meet a grisly end.

Wonder will Sharon gain a child and loose a child on the 35th? #EastEnders

With the show’s special anniversary just around the corner, it has been reported a main character is set to die.

But who will it be?

Next week, the drama will kick off when Sharon tells Dennis they are leaving Walford for a new life.

Wondering if Sharon will gain a child and lose a child on the 35th?

But her plans are thrown in the air when she goes into labour.

Recently Sharon told Dennis that Phil and his son Ben had Keanu killed, turning him against his step family.

However, Sharon knows Keanu is alive as he has paid her a visit and asked for her to move away with him.

Next week will also see Phil return to Walford and he and Ben soon come face to face with Keanu at the boat party.

Meanwhile, Ian is seen looking for revenge on the person responsible for putting his son, Bobby, in hospital. Is that Dennis? Is that how he could die?

It looks like the boat party will be ending in disaster.

A recent teaser for the soap’s anniversary has hinted that the boat will sink.