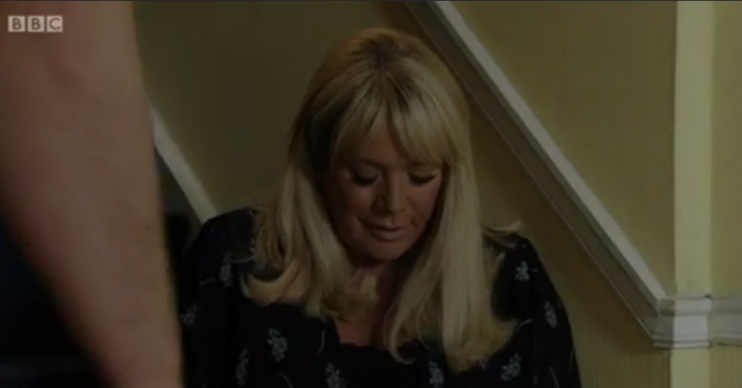 EastEnders: Sharon’s DNA results reveal Keanu is the father of her baby

It all kicked off in tonight’s episode of EastEnders (July 29 2019) as Sharon finally received the letter containing the results of her DNA test, to discover whether Phil or Keanu is the father of her unborn baby.

After sleeping with step-daughter Louise’s boyfriend Keanu, Sharon found out she was pregnant and, although she was ‘positive’ that the baby was her husband Phil’s, she decided to send off for a pre-natal DNA test.

However, Sharon didn’t get the result she wanted.

When she opened the letter that dropped through the box this evening, it read: “Dear Sharon Mitchell. I am writing to inform you that we have now completed the pre-natal DNA testing process on the samples listed below, received from you on 19th July 2019.”

The samples Sharon had sent off were, of course, from her and Phil…

The letter continued: “The results of the test are as follows: ‘The alleged father, Phil Mitchell, is excluded as the biological father of the unborn baby.'”

So this means that Keanu is the father of Sharon’s baby. (Unless there’s a big secret NONE of us know about..)

Unfortunately for Sharon, Bailey and Keanu’s half brother Keegan were working on Bailey’s recycling project for school and came across the letter.

Although Bailey and Keegan didn’t see what the letter contained they decided to get back at the Mitchells for the amount of rubbish the produce.

Phil arranged for Keanu to go away to work at another garage so Louise didn’t have to see him, but after some encouragement from Sharon and Bex, Louise rang to tell Keanu that she was still pregnant.

Were you shocked by the results? Leave us a comment on our Facebook page @EntertainmentDailyFix and let us know what you think!