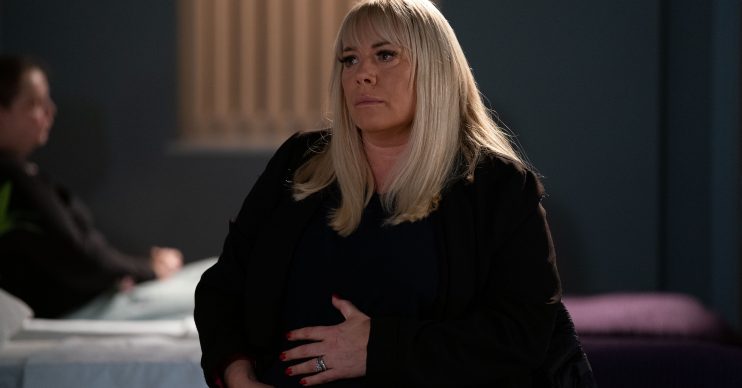 There is drama in EastEnders next week when Sharon Mitchell plans her escape from Walford, only to go into labour just at the wrong time.

As the show’s 35th anniversary episodes bring trouble and heartache to Walford, there’s drama aplenty for the Mitchell clan.

But while most of Albert Square’s residents are celebrating The Queen Vic winning London pub of the year with a boat party on the Thames, Sharon finds her world falling down around her.

After encouraging best friend Ian Beale to make amends with son Bobby, Sharon is shocked when Bobby finds himself the victim of a horrific attack that leaves him fighting for his life in hospital.

But while the Beale family rally around to try and help Bobby, even Peter Beale makes a surprise return to his old stomping ground while Bobby is in life-saving surgery.

However, the drama makes Sharon realise that her own life is far from perfect and she contemplates leaving London with Keanu Taylor, the father of her baby.

But with her relationship with her own son still estranged, Sharon decides she needs to move away with Dennis to make a fresh start with him and the new baby, which is due any minute.

However as Sharon tells Dennis that they are leaving Walford, it remains to be seen whether she is leaving with or without Keanu.

Sharon relays her plans to leave to Kathy, but before she can get away, a raging Ben thwarts her getaway and Sharon soon finds herself caught up in the drama playing out between Ben, Phil and Keanu.

Fans will know that Keanu has Callum Highway hostage in a bid to get revenge on Ben for wanting him dead – but will Sharon be the one to stop Keanu from killing an innocent man?

But before the drama can get any further, Sharon finds her day going from bad to worse when she suddenly goes into labour at the worst possible time.

Will she be able to get to a hospital in time? Or will her baby be born in the centre of the Mitchell showdown against Keanu?

But will Sharon die in childbirth? Or could someone else be the one to meet a tragic end?