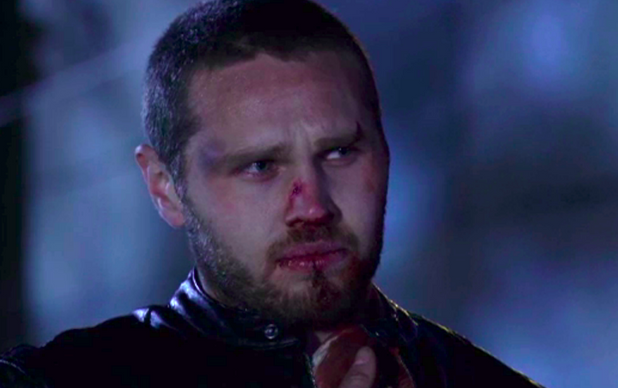 What was going on with the phones?

On Wednesday (January 1), the BBC soap revealed what really happened to the mechanic after Christmas Day’s explosive scenes which appeared to show him getting shot.

But many of those watching from home were left seriously confused by the chain of events, questioning what they thought were blunders in the script.

Is that a blunder or have I missed something?

We saw Martin Fowler, blackmailed by Ben to murder Keanu, agree to set his target free – after making a dangerous pact with eyewitness Linda Carter.

A drunk Linda had stumbled upon Martin and Keanu, and become forever embroiled in Phil Mitchell’s dark plot to kill Keanu after discovering he was the father of wife Sharon’s baby.

But some viewers were left scratching their heads as Martin handed his phone to Keanu before he vanished into the night.

So how did Martin later get a text from Ben when he returned to the Square?

And how could Martin show the video ‘evidence’ of Keanu’s shooting if he’d given his handset away?

One fan said: “Thought Martin gave his phone to Keanu? How come he showed the video to Ben?”

Another said: “If Martin gave Keanu his phone, then what did he show Ben the footage on? Is that a blunder or have I missed something? #EastEnders.”

A third added: “So Martin texts Ben when he’s given his phone to Keanu… Top marks EastEnders!!!”

“How did Martin show Ben the video of Keanu, when Martin gave Keanu his phone? What am I missing?” asked another.

How did Martin show Ben the video of Keanu, when Martin gave Keanu his phone? What am I missing?#EastEnders

@bbceastenders so Martin texts Ben when he's given his phone to Keanu…top Mark's Eastenders!!!

My thought exactly. Interesting the phone he showed the video on appeared to have a pink case. Martin doesn't look like the type of guy to have a pink phone. Another mystery

Thought Martin gave his phone to Keanu #EastEnders how come he showed the video to Ben?

Some fans tried to answer the mystery, explaining that Ben had given Martin a ‘burner’ phone before ordering him to murder Keanu.

One eagle-eyed viewer said: “Just to clarify, Martin had two phones, his own and a burner phone from Ben! The video was on the burner phone, Martin gave Keanu his, took Keanu’s, then Martin burned Keanu’s in that barrel at the end! Sorted, next!”

In fact, during the Christmas Day episode, Ben was seen giving Martin a white burner phone, which is what he used to film Keanu’s ‘death’.

Martin then gave Keanu his OWN phone, which was black.

Why did Martin take and burn Keanu's passport if he wants him to never return and didn't Martin take the video on his phone then gave it to Keanu as it's not linked to Him but then Martin had it again to show Ben??? I'm so confused 🤷🏼‍♂️ #Eastenders

But where is he escaping to with no passport or wallet….? #EastEnders

How can keanu leave the country Martin burnt his passport. #EastEnders

But where can Keanu go without his passport?? #Eastenders

So Martin burnt Keanus passport; so how is he gunna leave at the airport without it? I’m actually lost. #Eastenders

Others questioned why Martin was burning Keanu’s phone, passport and ID when he was supposed to be escaping the country.

One tweeted: “Why did Martin take and burn Keanu’s passport if he wants him to never return?”

Another said: “But where is he escaping to with no passport or wallet….? #EastEnders.”

A third added: “How can Keanu leave the country if Martin burnt his passport. #EastEnders.”

“So Martin burnt Keanu’s passport; so how is he going to leave at the airport without it? I’m actually lost. #EastEnders.”

Others suggested Keanu would get a fake passport, while some thought he might fly to Scotland where you don’t need one.

Many hoped this meant that Keanu wouldn’t travel far, and would one day return to Walford to exact his revenge. Watch this space!

What did you think of the New Year’s Day flashback episode? Leave us a comment on our Facebook page @EntertainmentDailyFix and let us know what you think!