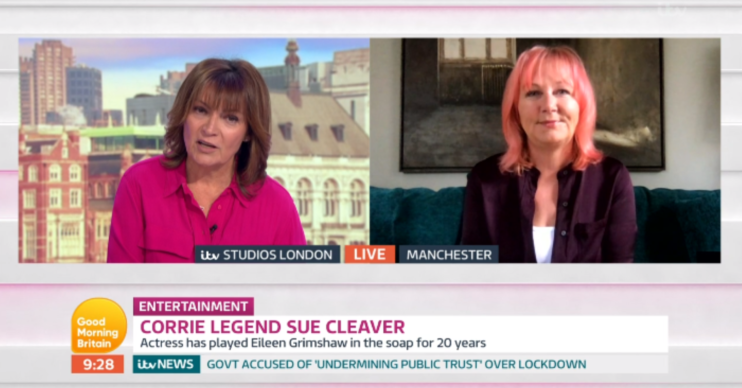 Coronation Street star Sue Cleaver has revealed she hasn’t been able to meet her new baby grandson due to the coronavirus lockdown.

Sue, who is celebrating 20 years on Corrie as Eileen Grimshaw this week, appeared on Good Morning Britain today (Monday, May 4) to chat with host Lorraine Kelly.

As Sue talked about her time on the soap, Lorraine asked the Corrie star about missing her family and Sue revealed she has a new grandson, who she can’t meet.

She said: “We’ve got a grandchild called Thomas, who’s six weeks, who we haven’t seen yet. So obviously missing all the family and missing my mum, who’s in the Cotswolds on her own self-isolating.”

Sue also spoke about how she met her current partner whilst working at Coronation Street.

Speaking about her other half, she said: “He’s a gaffer on the street, a lighting gaffer. So yeah we’ve been together almost as long as I’ve been there.”

This week it will be 20 years since Sue first appeared on-screen as Eileen. But due to the pandemic, the soap has suspended production and cut episodes.

Although she is unable to go out and celebrate, Sue stated that she and some of her work colleagues will be doing an ‘Eileen themed night’ at Daniel Brocklebank’s virtual bar.

Daniel has regularly been hosting nights with his Corrie co-stars.

Sue said: “In honour of Eileen’s 20th anniversary, tonight we are doing an Eileen theme night.”

What Coronation Street storylines is Eileen involved in?

Currently Eileen isn’t at the centre of any storylines, but last week, viewers were furious with her after she witnessed Geoff abusing Yasmeen.

For months Geoff has been abusing Yasmeen in a coercive control storyline. But Eileen was left suspicious after Geoff locked Yasmeen in a magic box.

After witnessing Geoff abusing Yasmeen in Friday’s episode (May 1) Eileen didn’t tell anyone in the pub what she saw.

Back at home, Yasmeen was forced to defend herself as Geoff threatened to kill her.

As Geoff lay slumped on the floor, Yasmeen was left in shock. But will anyone believe her? Will Eileen tell people what she saw?