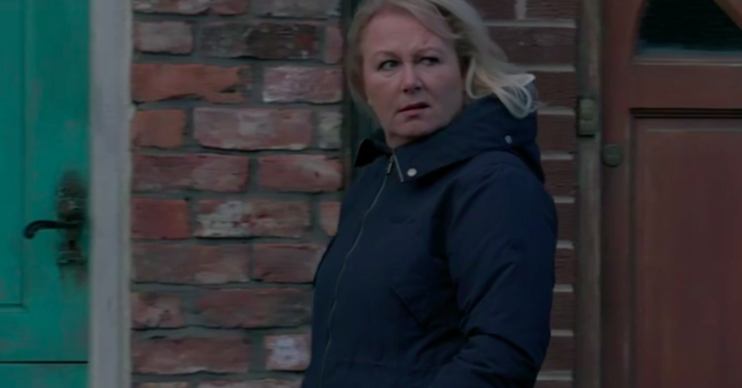 Coronation Street fans are furious Eileen Grimshaw ignored Yasmeen being abused after witnessing Geoff Metcalfe shout at her and lock her in the house.

Cab controller Eileen looked horrified as she heard Yasmeen forced to beg her abusive husband for forgiveness after questioning how he stole money from her business.

He had grandly announced in the Rovers that he was going to pay for son Tim and daughter in law Sally’s wedding.

A confused Yasmeen asked him how he was funding it given he keeps her on a short-financial leash.

Geoff told her he had taken money out of her business Speed Daahl and left her confused, and he seized the chance to get her out of public to abuse her in private.

Dragging her home, he hectored her in the street not realising Eileen had overheard as Yasmeen begged for forgiveness.

She then watched stunned as Geoff locked a whimpering Yasmeen in the house and walked off.

The look on Eileen’s face said it all but she didn’t actually do anything and instead watched it all unfold and then continued to the pub.

And even in the pub she only said that she had seen them row, mentioning nothing of the abuse.

One said: “Seriously are the neighbours really that thick?

“Especially Eileen! She saw Geoff lock Yasmeen in with her begging and describes it as them ‘having words’. Give me strength Face with rolling eyes #Corrie”

A second said: “I find it weird tonight Eileen said she seen them have words.. she didn’t all she seen was Geoff locking her in and Yasmeen wanting to get out.. I didn’t understand that #Corrie”

A third said: “Some friend Eileen is. She saw Geoff lock Yasmeen in the house and leave her Face screaming in fear #Corrie”

However despite Eileen’s initial lack of action, fans are convinced she will be the one to save Yasmeen.

One said: “Eileen is going to be the one to work this out. What an episode, brutal and harrowing to watch, a testament to the actors and crew #Corrie”

After going int the house Geoff continued to abuse Yasmeen before threatening her with a knife forcing her to defend herself with a wine bottle.

Who do you think will save Yasmeen? Leave us a comment on our Facebook page @EntertainmentDailyFix and let us know what you think!