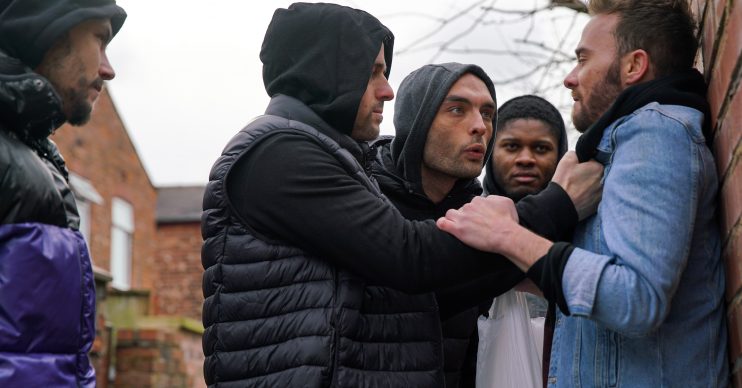 Why is Coronation Street running dark storylines during the coronavirus pandemic?

There are some hard-hitting storylines coming up on Coronation Street

Soaps such as Coronation Street provides a form of escapism for its viewers.

Currently in the UK, soaps have stopped production, schools have closed along with thousands of businesses due to the coronavirus pandemic.

During the UK lockdown, the shows are still airing on a reduced schedule. However some viewers aren’t happy with the current dark storylines being shown on Coronation Street, including the death of Eccles the dog.

Why write #Eccles out then?? Sorry I love #Corrie but that was an unnecessary depressing storyline! And the fact Ken wasn’t even there makes it even worse, horrible! https://t.co/2fqLdNwILm

Why has the show decided to air such dark storylines during the UK lockdown, some are asking?

The reason is because it’s quite simply unavoidable. Production plan plots months ahead.

As soaps film at least six to eight weeks in advance, it’s unfortunate that darker storylines have fallen in the middle of a crisis.

What storylines are coming up on Coronation Street?

For months, Yasmeen has been abused by her husband Geoff. However her granddaughter Alya has been suspicious of Geoff’s behaviour for a while.

We’re in the middle of a pandemic and Corrie kills Eccles off.

Although Yasmeen refused to listen to Alya, she has started to see Geoff’s true colours after catching him threatening Alya.

She recently got in contact with the police to access information under Clare’s law. However she’s decided to think about things before she makes any big decisions.

With the storyline far from over, Corrie viewers are going to see more of Geoff’s control.

New girl Kelly persuades Asha she should get together with her crush and ex-boyfriend Corey. But when Asha finds her best friend Amy and Corey looking cosy, she’s crushed.

Eventually the girls put things aside and Amy has a party. Asha confides in her friend that she did a striptease for Corey on a video call.

But soon the house becomes filled with gatecrashers and immediately blames Kelly.

As Corey scrolls through the pictures of Asha on his phone, he accidentally smashes on of Tracy’s lamps.

Assuming Kelly is the culprit, Amy is furious. But whilst the drama with the lamp is going on, someone sends the pictures of Asha to the party group chat.

After the party, Asha realises her pictures have gone viral and is devastated.

Since the birth of her quads, Gemma has been struggling with post-natal depression.

Gemma went to the doctors and pretended she was okay. However she’s been struggling with dark thoughts.

Read More: Coronation Street and Emmerdale actors will be given three months salary despite not filming

Next week, Gemma will go to see Dr Gaddas again. She explains she is suffering with postnatal depression.

Gemma breaks down to fiancé Chesney and her mum Bernie steps in to help.

Are things finally looking up for Gemma?