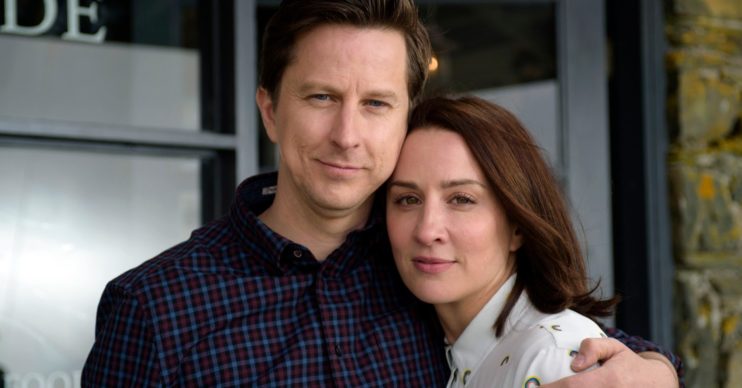 Do Paul and Alison get back together in The A Word and why did they split?

The A Word is back for series 3

Paul and Alison appeared to be over for good in The A Word.

She’s since moved on with Ben in Manchester while he’s started dating Sarah in the Lakes.

But will Paul and Alison get back together?

And why did they ever split up?

Why did Paul and Alison break up?

In The A Word season three, it’s confirmed that Paul (Lee Ingleby) was the one who called time on the relationship.

Although it’s a choice that disappointed fans, it wasn’t exactly a huge shocker.

The couple’s marriage had been under huge strain for years.

Making matters worse, last series, the relationship was put under even more stress when Joe was enrolled into a school in Manchester.

Exhaustingly, this meant that the parents faced a 100-mile school run daily.

But Alison was determined to enrol Joe as the school was able to prioritise Joe’s special needs.

In season one, it was Alison (Morven Christie) that struggled to come to terms with her son’s autism diagnosis.

However, the tables turned in season two and it was Paul that was finding Joe’s condition hard to accept.

During a night out at a gig in Manchester, Paul got a taste of what life would be like away from the family home – and he seemed to like it.

So much so, he almost cheated on Alison with waitress Sophie (Lucy Gaskell).

Opening up about the state of Paul and Alison’s marriage, Morven warned What’s On TV at the time that the situation was a “mess”.

READ MORE: Does Maurice die in The A Word? Christopher Eccleston discusses series 3

“Alison hasn’t understood how everything has gone wrong,” she said. “It has knocked her for six.

“It’s all connected to how he’s feeling about Joe and Alison struggles to understand that too.

“Paul was the one who was more accepting of Joe while Alison worked hard to reach that point but now he has gone the other way.”

Do Alison and Paul get back together?

Fans of The A Word are desperate to see them get back together.

In fact, they’ve been taking to Twitter weekly to make their feelings known.

One wrote: “#TheAWord Is honestly one of the best series. It’s just the cutest. If Alison & Paul don’t end up back together before it finishes I’ll be gutted.”

Another added: “Great scenes between Joe & Mark and Ralph & Maurice. Would love to see Alison & Paul back together #TheAWord.”

We can’t yet reveal if Alison and Paul do get back together.

However, in the The A Word series 3 finale, Alison’s relationship with Ben (David Gyasi) is in serious trouble.

Elsewhere, Sarah (Gemma Paige North) takes Paul to one side to deliver some disappointing news.

Could this clear the way for an Alison and Paul reunion?

What happens in The A Word season 3 finale?

The final instalment of The A Word series 3 is packed with drama.

It kicks off with Rebecca (Molly Wright) travelling up to Manchester to pay a visit to Joe’s (Max Vento) school.

She makes the journey after her little brother asks her to talk to his classmates about her pregnancy.

After worrying that her unborn may be born with autism, spending time at Joe’s school eases her anxieties.

But as the siblings traveling back home to the Lakes, she’s forced to pull over after going into labour early.

Making matters worse, her phone is out of battery and Joe becomes frightened when she starts screaming in pain.

Will the baby arrive safely with only Joe around to help?

Maurice tries to save the day with a grand gesture but is Louise ready to take the next step?

How did The A Word series two end?

The A Word series two concluded with an ambiguous ending.

Although Paul packed his bags and was ready to leave the family, the series finale saw him reunite with Alison, Joe and Rebecca on top of a camper van.

Despite this heartwarming scene, it was the end of his marriage – but it wasn’t the end of the family unit.

Catch up on The A Word series three with BBC iPlayer.

BBC Drama BBC One The A Word